Jeff Fell had some big boots to fill when he started his riding career in Florida in the winter of 1974. The youngster from Hamilton, Ont., was the leading apprentice at both the Gulf-stream and Hialeah meetings and was being hailed as the “next Sandy Hawley.” The shoes fit.’ 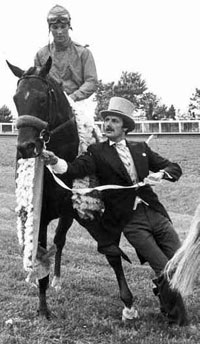 Fell’s services on the Ontario Jockey Club circuit were in heavy demand when he returned to Canada that spring. He was offered 1,153 mounts and won on 210 of them to earn honors as the country’s leading apprentice. Hawley and Fell dominated racing in Canada in 1974. But for the next three years it was Fell who ruled the jockey standing as Hawley headed to the United States to conquer new fields. During his first four years on home turf, Fell won a total of 939 races and earned a Sovereign Award of merit as Canada’s leading apprentice jockey in 1974. He was the leading rider in Canada in 1975, 1976 and 1977. His major triumphs in Canada came in 1976 when he won the Queen’s Plate in dramatic fashion on Norcliffe and the Canadian Oaks with Bye Bye Paris. But like Hawley, Fell left Canada to ride in the United States and it wasn’t long before trainers in the “Big Apple” recognized Fell’s talent. He was soon riding some of the top horses on the New York Racing Association circuit.

In 1980 Fell swept the major handicap races with Rokeby Stable’s Winter’s Tale – the Brooklyn Handicap, Suburban Handicap and Marlboro Cup. In the Marlboro at Belmont he upset the favored champion Canadian filly Glorious Song. Fell also won the 1979 Alabama on It’s In The Air, guided Pleasant Colony to victory in the Wood Memorial in 1981 and took the historic Champagne with Timely Writer in 1981.

Fell helped engineer one of the major upsets in thorough-bred history in 1982 when he rallied Canadian-bred Runaway Groom from last place to win the historic Travers Stakes at Saratoga. Fell and Runaway Groom, later inducted in Canada’s Hall of Fame, defeated Kentucky Derby winner Gato Del Sol, Preakness champion Aloma’s Ruler and Belmont Stakes winner Conquistador Cielo. It was the first time the winners of the three Triple Crown events had met, but it was Fell and Run-away Groom at the finish line.

Fell was 16 when he arrived at the racetrack in 1982, spending a year doing the usual stable jobs for trainer Bill McKinnon. He rode in six races in 1973, but didn’t break his maiden until January 10, 1974, at Calder racecourse in Florida on Dusty Dollar. It was only natural that another Hall of Fame jockey from Hamilton, Chris Rogers, would be a factor in Fell’s development in the fundamentals of race riding. “Chris taught me the basic fundamentals of riding. When you ride as many as 1,200 horses a year, you then gradually pick up your own style. I try to sit on a horse as quiet and level as possible.” One of Fell’s trademarks on a horse was his elegant posture in the saddle during post parade.

Winner of the Avelino Gomez Memorial Award in 1989 for his contributions to the sport, Fell partnered 2,637 winners. His mounts earned more than $38 million. Weight problems and illness, which forced him to miss most of the 1986 season, prompted his early retirement at age 30.