One wonders what Dream of Glory’s record would have been if his owner, Leo Soehnlen of Canton, Ohio, had made the colt eligible for trotting’s rich events – the Hambletonian, Kentucky Futurity, Yonkers Trot, Dexter Cup or the Colonial. He said in an interview that he didn’t “cry over spilt milk” and took full blame for not keeping Dream of Glory eligible. “Most of my time goes into the dairy business and I was just sleeping at the switch and not studying what was required in having a colt properly staked.” After the foal by Speedy Count-Dixie Valley arrived in 1971, Soehnlen was strolling in the pasture one evening with the dams and their foals around him when his wife asked, “Are you dreaming of glory?” Leo replied, “That’s it. That’s what I’ll call this one.” And Dream of Glory was christened.

Despite not being eligible for the major races, Dream of Glory distinguished himself as a racehorse and later as a stallion. He was the USTA champion at ages three, four and five and world champion at age five. Purchased in 1976 as a 5-year-old by Armstrong Bros., and its partner, Enterprise Stables, he joined the stallion ranks at Armstrong’s nursery in Inglewood, Ont., where for years he was without peer as a Canadian sire of trotters.

At age two Dream of Glory won 15 of 19 starts, including the Ohio Standardbred Futurity, Arden Downs and five Ohio State Stakes. He won 18 of 25 starts the following year, including the Old Oaken Bucket, Transylvania Trot, Leland Stanford Trot, Pacific Trot and five Ohio Colt Stakes. At four he won nine races, including the Civic Holiday at Greenwood, Earl Clay Memorial, Transylvania Trot and Marquis de Lafayette Trot. He closed out his racing career in 1976, winning eight more races. His wins included the Titan Trot, Columbian Trot, Stars and Stripes and the Marquis de Lafayette Trot. Dream of Glory retired as the all-age world record holder of the fastest mile (1:57.3f) over a five-eighths mile track and 50 wins and 24 in the money finishes in 86 starts. He was driven by Leo’s son Pius at ages two, three and four and by Joe O’Brien at five.

At stud, he sired the winners of $47.9 million. They included 144 winners of $100,000 or more – Armbro Luxury, Shipps Dream, Oaklea Count and Armbro Hinter. He has also proven to be a prolific broodmare sire. His daughters are the dams of 38 trotters with marks of 1:55 or faster, including Wesgate Crown, Goodtimes and Glorys Comet. Dream of Glory died in 1992 at age 21. 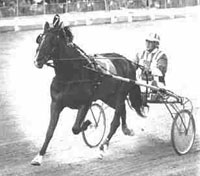