In 1990 No Sex Please became the first Canadian-bred trotter to win a million dollars and a Breeders Crown, a feat he accomplished while setting his lifetime mark of 1:55 at Florida’s Pompano Park. At age seven he again dominated the aged trotting competition, winning his second Breeders Crown, this time at Mohawk. He also established three world records as an aged gelding and in 1989 and 1990 was voted O’Brien Awards as Canada’s best Aged Trotting Horse. 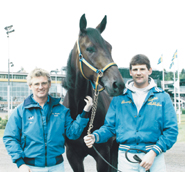 No Sex Please was owned by Ron Waples Jr., of Hillsburgh, Ont., who entrusted much of the race-driving responsibilities throughout the “never-say-die” gelding’s career to his father, Ron Sr. The winner of $1,884,392, No Sex Please was a foal of 1985 and the son of a perfect cross of pedigree and conformation – the breeding of the big, rough mare Gay Ann Herbert (a granddaughter of Hall of Famer Make Believe) to the beautifully-gaited little stallion Brisco Hanover.

Among the world records he established were: fastest aged trotter on a 5/8ths-mile track while winning the 1989 Maple Leaf Trot at Greenwood; fastest aged gelding on a mile track in capturing the 1990 Speedy Scot Trot at the Red Mile in Lexington, Ky., and fastest aged gelding on a five-eighths mile track when he won the Breeders Crown at Pompano. No Sex Please retired with 51 wins, 35 seconds and 19 thirds in 137 starts in an eight-year career. In 1987 at age two No Sex Please won OSS races at Mohawk, Greenwood and Barrie At three he won the Simcoe, his first stakes event against open competition, Flamboro Breeders and OSS at Greenwood. He was second in the World Trotting Derby. At four he beat the best older trotters in the Maple Leaf Trot, Titan Trot and a leg of the Meadowlands Su Mac Lad Series.