Mike Lachance, a native of St. Augustine, Que., holds a formidable position on the list of the greatest money-winning drivers in the history of harness racing in North America. His horses have earned over $192 million and he accumulated over 10,400 victories during his career.

Born in 1950, Lachance’s best years arguably came in the late 1980s, 1990s and 2000s when he was in his late forties and early fifties. From 1996 through 2003, Lachance each year drove the winners of over $8 million. In that same span, he won the game’s biggest trotting prize, the Hambletonian, with Victory Dream, Continental victory, Self Possessed and Amigo Hall. Lachance won pacing’s biggest prize, the Little Brown Jug, five times between 1988 and 2001 with B J Scoot, Goalie Jeff, Magical Mike, Western Dreamer and Bettors Delight. Canada’s biggest race, the North America Cup, has been won three times by the Quebecer – Safely Kept, Straight Path and Bettors Delight. Almost every major big-money stakes race, including the Prix d’Éte, Confederation Cup, Yonkers Cup and Cane Pace, has Lachance’s imprint on it as well. Lachance has also won -Breeders Crown races since 1985 when he won the Aged Pacer title with Division Street. 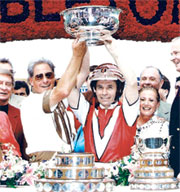 In a seven-day span in 1996, Lachance won The Hambletonian, the Woodrow Wilson, the Mistletoe Shalee and The Adios. In the span of six weeks in 2003, when Lachance was53, he won three of the sport’s biggest races -the Meadowlands Pace, the Hambletonian and the Confederation Cup, and on each occasion driving horses he had never sat behind before. Among the great horses he’s guided is Bettors Delight, who was clocked in1:50 while winning the New Jersey Classic in 2001. Lachance was also the driver behind two of the fastest harness horses in history – Matts Scooter and Camluck. Lachance was regarded by some as the very best in a pressure situation or in a time trial. If a book were ever written on the art of the time trial, Lachance’s handling of Matts Scooter (1:48.2), Camluck (1:48.4) and Caesars Jackpot (1:49.2) would be required reading. Three of the horses Lachance drove, Bettors Delight, Matts Scooter and Camluck, are members of the Hall of Fame.

One of Gédéon and Francoise Lachance’s eight children, including five boys that were harness racing drivers, Mike learned his earliest lessons from Gédéon while driving the family’s horses in the winter. “I remember my father coming to the house and picking me up in the wintertime and we were going in the sleigh with the horses and he would stop on the side of the road and would give me his pocket knife and say, ‘Just cut a little branch there.’ When we were coming back home with the horses he used to teach me to touch them (with the branch) to make them go faster. I was five, six years old and I was getting all the snow in my face. I’ll never forget those things. Wherever he went he would always bring me along with him.”

Mike’s older brother, Gilles, was also a member of the Canadian Horse Racing Hall of Fame and their nephew, Luc Ouellette, was atop driver on the Woodbine Entertainment Group (WEG) circuit with over $110 million in purse earnings to his credit. Mike’s son, Patrick, is a rising star as a trainer and driver in New Jersey.