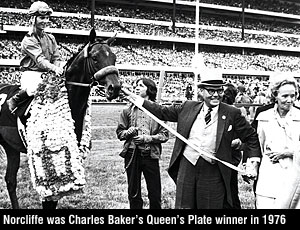 The first horse to carry the red and blue silks of Charles (Bud) Baker’s Norcliffe Stable in the Queen’s Plate was aptly named Norcliffe. The bay colt won the 1976 Plate as the heavy favorite for the Chairman of the Board of the Ontario Jockey Club, a man with long and devoted history with equines, a history that dated back to his grandfather, The Reverend Dr. Edward Norcliffe Baker. The harness racing silks that Rev. Baker used in the 1870s while racing at local fairs in the Oakville area were made of the Union Jack flag. Born in 1920 in Toronto, Baker grew up riding ponies and hunting mounts. At age 19 he enlisted in the service. Twice wounded and three times mentioned in dispatches during European campaigns with the Canadian Armoured Corps, Baker reached the rank of Lieutenant-Colonel.

After the war he rejoined his father’s firm before forming his own outdoor advertising company in 1949. Concurrent with his business career, Baker pursued horses as a hobby, and sometimes as a full-time occupation. After the war he bought a horse by Archworth, the 1939 Plate winner, and started riding and hunting again. He was a member of Canada’s International Equestrian team (1948-1960) and Chef d’Equipe of Canada’s Olympic Games team, winning a bronze medal at the 1956 Olympics in Sweden and a gold medal at the 1959 Pan American Games. At Madison Square Garden he won the West Point Challenge Trophy on Starclift. In 1961 trainer Gord Huntley got Baker into thoroughbred racing. With his first runner Baker had a short-course on the luck of racing. The colt won his first two races and then was haltered out of a $10,000 claiming race. Baker later purchased yearlings, racing a small stable under the name of Norcliffe, the name of his farm and home in the hunt country around King, Ont. He often broke and galloped his own runners.

Elected as a director of the OJC in 1967, he was appointed Chairman of the Board in 1973, a position he held until 1991. Baker was excellently prepped for his new job, both in the spheres of horses and business. He was in the forefront of change in way the business was conducted by the OJC. He was first to broach Taylor with the thought of non-profit status in order to further enhance racing’s growth. Baker also encouraged President Jack Kenney’s innovative efforts to develop a modern pari-mutuel system, which is now in use around the world, and spearheaded international racing and sponsorship through the 1970s and 1980s. He was determined to bring the world’s finest horses to Woodbine. The inauguration of the $1 million North American Cup, Canada’s richest harness race, was largely due to his efforts after the concept was presented. Baker was a former Steward of the Jockey Club of Canada and a member of The Jockey Club, New York.

Baker’s stakes winners included Duns Scotus, Clausewitz and Rockcliffe. But it was Norcliffe who was the prize of the stable. He was Canada’s champion 3-year-old and older horse and at stud in Florida and Kentucky sired Eclipse Award sprint champion Groovy. He is the grandsire of 1992 Kentucky Derby champion Lil E. Tee. 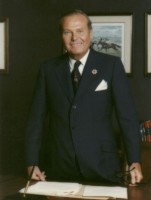