Born in Thessalon, Ont., Edmund Millar Bradley was introduced to harness racing by his father Cliff, who always had a few racehorses. At the age of nine, Ed Bradley had a license to drive harness racehorses. At the age of 10, he drove in a match race against future Hall of Fame inductee, the Hon. Earl Rowe, at Little Current, Ont. However it was not as a harness driver that Bradley was to later distinguish himself, it was as an effective racetrack administrator and executive. In his youth Bradley served as a mate on the ships that sailed the Great Lakes. 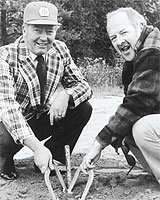 During his long career in both harness and for a period in thoroughbred racing (he once called the races at Dufferin), Bradley was a director of the Canadian Trotting Association (1959-1974 and 1979 -1982). When the Ontario Jockey Club formed its standardbred racing circuit in the 1960s, Bradley played an an important role as general manager of Greenwood, Mohawk and Garden City Raceways, taking the circuit to the forefront of North American harness racing. He lured the prestigious Grand Circuit into Ontario and soon there was a steady stream of top-notch horses and drivers making regular visits for OJC stakes. Bradley also served in management at Assiniboia Downs in Winnipeg, Montreal’s Blue Bonnets and Dufferin Park in Toronto.

He was known by horsemen as a man of solid reputation, who could get things done. As president of the CTA, Bradley launched the prestigious Can-Am Series. Once a Toronto reporter asked the immortal Billy Haughton what he was doing at Mohawk when he could have been racing in a richer stake in New York, Haughton pointed his whip at Bradley and said, “That’s why I’m here”, as testament to the high esteem in which racing held Edmund M. Bradley. He died on December 10, 2006, at the age of 81.