Merv Peters’ association with horse racing began in 1952 when he cut short his honeymoon to take over the thoroughbred beat for the Vancouver Sun, where he had started as a copy boy four years earlier. He was promoted to the position of sports editor in 1958 while continuing to cover racing and handicapping the races at Hastings Park and Lansdowne. He also hosted the first live TV shows of horse racing in the province. In 1961, after attending a racing officials’ school in New York, he became an associate steward with the newly formed B.C. Jockey Club. The BCJC was an amalgamation of the Ascot Jockey Club, which operated Hastings, and BC Turf, the owners of Lansdowne.

Peters, who became presiding steward and director of racing, played a key role in the growth of the mutuel handle and the increase of purses. In 1975 he stepped down as presiding steward and became general manager. Some of the major changes which Peters helped lead were rebuilding the track and grandstand prior to the 1965 season, another grandstand extension in 1976, the installation of lights to facilitate night racing in 1968, pioneering sweep six wagering in 1982, and getting the provincial government to reduce the pari-mutuel tax in 1971. Peters was one of the few racetrack managers to see the daily mutuel handle climb 10-fold. It climbed from about $100,000 in 1961 to more than $1 million when he left the track following the 1994 season when the Pacific Racing Association, a provincial government body, took over the Hastings operation.

His influence was also felt on a national scale. In 1965 he was one of the founding members of the National Association of Canadian Racetracks (now Racetracks Canada). In 1970 he was named president, and in 1982 served a second term.

Peters was also responsible for establishing Racetrack Security Canada and served as president of that organization. He celebrated his 75th birthday in August, 2006. 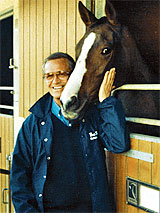