Several years ago trainer Harry (Never Hurry) Poulton was at his training centre near Lake Scugog, discussing a precocious juvenile in his stable, a high-strung youngster, a bumptious troublemaker who was always in far too big a hurry. “He wanted to do everything 100 miles an hour. He tried to do everything in a rush. As he got older, he settled down.” His name was Matts Scooter, and on Sept. 23, 1988, he was certainly in a huge hurry when he shocked the racing world by clocking a time trial of 1:48.2 at The Red Mile in Lexington. The unforgettable display of raw power shattered Niatross’s seemingly invincible world mark by almost a full second. Poulton, who suffered a few anxious moments before the famous trial, said: “He was a SOB. He never really did anything bad. He didn’t break any carts, but it wasn’t for lack of trying. He was always bucking, kicking or doing something. We shipped him home 12 hours one day, and the next day he was on his hind legs in the yard. I don’t know where he got his energy.” When he retired as the fastest 3-year-old in stand- ard bred history, and became one of harness racing’s great sires, his bankroll showed earnings of $2.9 million, which included a single-season record of $1.7 million in 1988.

During his three-year campaign for Poulton and owners, Gordon and Illa Rumpel of Calgary, and Charles Juravinski of Dundas, Ont., Matts Scooter’s habit of always being in a hurry earned him numerous honors and stakes victories across North America. He was voted Horse of the Year by the USTA in 1989 and was Canada’s Horse of the Year in both 1988 and 1989. The son of Direct Scooter-Ellens Glory also earned champion 3-year-old and pacer of the year awards in 1988 and ’89 by the USTA.

He was purchased by Rumpel in 1986 for $17,500 and was bred by Max Gerson of New York. Lightly raced at two, and ineligible for the lucrative Little Brown Jug and Cane Pace at three, Matts Scooter still managed to earn $1.7 million, winning 11 races and finishing out of the money only once in 22 starts. His career stakes wins include the Meadowlands Pace, Messenger, Breeders Crown, American-National, New Jersey Classic, Prix d’Ete, Nat Christie Memorial, Confederation Cup, Driscoll, Mohawk Gold Cup, Stewart Fraser Memorial, Cornell Memorial and U.S. Pacing Championship. His regular driver was Mike Lachance.

At stud Matts Scooter was just as spectacular at Perretti Farms in N.J. By 1995 he was North America’s overall leading sire of 2 and 3-year-olds. His sons and daughters include the richest in their classes, numerous divisional and world champions. Mach Three ($2.3 million) heads the list, a 1:51.1 performer at two and 1:49 at three, along with Her Mattjesty, Royal Mattjesty (1:48.4), His Mattjesty, Mattaroni, Mystical Maddy and Mattgilla Gorilla. His offspring had earned $64 million prior to the 2006 season. He had 133 performers of 1:53 and 674 performers with 2:00 marks. Matts Scooter was inducted in the U.S. Harness Racing Museum and Hall of Fame in 2006. 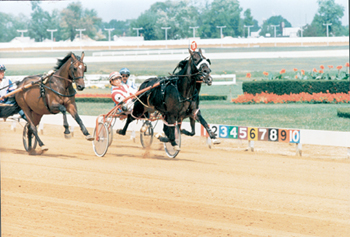