The man appointed by Premier Leslie Frost in 1950 to legislate the sport of horse racing in Ontario admitted that all he knew about a horse “was what my old riding instructor told us at RMC (Royal Military College).” As to what the job entailed, Magistrate Sherburne Tupper Bigelow was not quite sure. One of his functions, he knew, would be to cut down bookmaking and whatever non pari-mutuel betting at race tracks.

It wasn’t long before the government came to realize that the 49-year-old Bigelow was the ideal individual for his role of correcting many of the problems hindering the growth of both thoroughbred and standardbred racing in Ontario. The early years under the chairman were evolutionary ones for the commission, which was the first one in Canada. One of its first moves was the introduction of the “film patrol”. The motion picture camera, used to film races from several vantage points, enabled the ORC to build up a case in a betting- ring scandal in 1951 at Fort Erie, one that saw 10 jockeys and a trainer ruled off North American tracks for life. Magistrate Bigelow and the ORC instituted many important procedural changes to protect and uphold the rights of licencees. Under his guidance and a board that included George C. Hendrie, Burton McLean, D. A. McIntosh and Bill Risewick, the ORC brought in legislation that mandated that all persons connected with racing in the province be fingerprinted and the enforcement of jockeys wearing safety helmets. 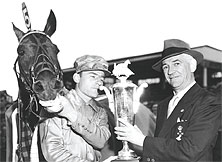 Judge Bigelow was one of Ontario’s leading magistrates, tough but fair. He was widely recognized by barristers who appeared before him that if their case was sound, their chance of success was high. He conducted the affairs of the ORC in the same fashion. When he was inducted into the HOF, it was noted that he was being honored as the man who wrote the rule book for the sport and in the process set the standard for all Canadian racing jurisdictions. He served as Commissioner until 1965.

Bigelow was one of the world’s leading authorities on Sir Arthur Conan Doyle, author of the Sherlock Holmes mystery novels. In 1970 the Toronto Reference Library acquired an extensive collection of Sherlockian ephemera from collector Judge S. Tupper Bigelow. 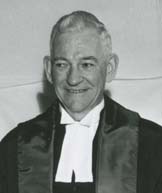