Max J. Webster’s entry into the sport was a winner from the start. In 1957 the horseman from Brantford, Ont., purchased a number of broodmares. From the first crop of foals of these mares came Baron Atom, Canada’s Horse of the Year for 1961. He, as with many of the Webster stock, was raised at Webster’s Lynden Hill Farm. For a number of years up to the dispersal of his stock in 1990, Webster operated one of the more successful stables in Canada. Among the more notable horses he bred and or campaigned were Lynden Dodger, the first Canadian-bred 2:00 minute two-year-old; Canada’s 1966 champion three-year-old trotter, Armbro Harold; 1969 champion three-year-old trotter, Gayest Hanover and the 1967 and 1972 Queen City Pace winners, forerunner of the North America Cup, Lynden Dodger and Lynden Bye Bye respectively. Among his many other stakes winners were pacers Lynden Chief, Sales Pitch and Flicker Hanover and trotters Niagara Chance, Armbro Hinter, Armbro Gazelle and Lynden Victory. 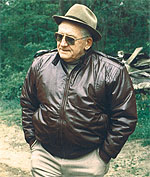 Webster was also very active within the administrative sector of the sport. Webster was a member of the Ontario Racing Commission for 10 years, four of them as vice-chairman. He also served on the board of directors of both the Canadian Standardbred Horse Society and The Canadian Trotting Association.

Webster was also a trustee of the Ontario Jockey Club and sat on the industry appeal board operated by the ORC.

Whether it was on the track or in the boardroom, Webster was a major positive force within the sport.