Ray Remmen was an integral figure in spurring the sensational growth of harness racing on the Canadian prairies in the late 1960s. He was born in 1947 in Hanley, Sask., and was named in honor of his uncle, Ray Hunter, who was shot down during a mission over the Mediterranean in 1943 while serving with the RCAF. Ray followed his grandfather, Art Hunter, into the sport. His granddad had farmed with horses and after World War II he bought a thoroughbred that accomplished nothing, then switched to standardbreds and began dabbling with them. It was during this period that four-year-old Ray Remmen started going to the track, and by age eight was jogging his grandfather’s horses.

In 1963 at the age of 16 he received his driving permit. That was just two years after Bill Connelly started the western harness racing circuit. When he graduated from high school in 1964, Remmen and his grandfather took a load of horses to Phoenix, Ariz. That summer Remmen at age 17 won the Western Canada Pacing Derby with Chunky Mohawk. He thought that racing horses was an easy game, but had his eyes opened soon enough. “When Phoenix closed we went to Windsor Raceway because we were broke. We raced at Mohawk and went to Buffalo and Batavia. Our horses were no good at all.”

Returning to the prairies Remmen quickly became a fan favorite and with him harness racing gained in popularity. Remmen credits the progeny of Adios Pick for helping his career. His grandfather and Dr. Brad Gunn went to Harrisburg, Pa., for the sales and came home with a young stallion, Adios Pick, who changed the entire complexion of the sport in western Canada. “Adios Pick’s progeny started racing when I was 16 and that really, really helped my career. He bred a lot of cheap mares and came up with a lot of good horses,” recalled Remmen. In 1975 he recorded the west’s first sub 2:00 minute mile (1:59.4) in the Western Canada Pacing Derby with Stormin Stephen. It was his fourth Derby victory; the others were with his grandfather’s horses, Neebook in 1970, Eyrego Express in 1972 and Chunky Mohawk in 1964.

Remmen made The Meadowlands, N.J., his home base in the mid 1970s and the success he enjoyed at every step of his career followed him there. The very first race of The Meadowlands in 1976 was won by Remmen with Quick Baron. “That was a nice way to get started at the The Meadowlands,” remarked Remmen. He was fourth in money earnings that first year and by 1980 his stable cracked the $1 million mark, ranking it first among all stables competing there. He was leading trainer three more times during the 1980s and was always ranked among the top five. His stable was the first to win 1,000 races at the Big M.

Equally at ease with either a trotter or pacer, he reined the first Hambletonian winner at The Meadowlands with Shiaway St Pat in 1981. Outstanding horses continued to add to his resume – Grade One, winner of the Woodrow Wilson, Halcyon, juvenile champion filly who won the Breeders Crown, Duchess Faye, Keyser Lobell, English Tutor and Beach Towel, the pacer that would highlight Remmen’s career as both a driver and trainer. The colt won 18 of his 23 starts in 1990, became the first standardbred to earn more than $2 million in one year and was voted Horse of the Year. 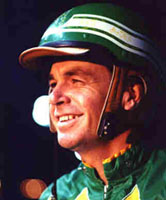