Donald Gilpin (Bud) Willmot’s success in the world of thoroughbred racing and breeding was accomplished in much the same way he rose to the top in the business world as president and CEO of Anthes Imperial and later Chairman of Molson Industries, Ltd. – with careful planning and the fortitude to stick with his strategy despite momentary setbacks. When he died at age 77 on January 31, 1994, an obituary said: “Long before his death, Bud Willmot had secured a place among the colossi of Canadian horse racing. Like E.P. Taylor, the Seagrams and Hendries, he left an indelible mark. No history of the sport will ever be complete without an account of all Willmot’s Kinghaven Farms accomplished as a breeder and owner.” 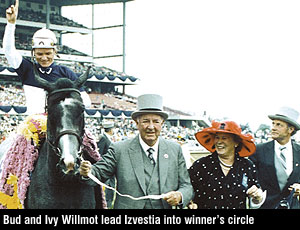 Willmot’s Kinghaven Farms won nine Sovereign Awards as Canada’s leading breeder and five as the outstanding owner. In 1979 he was chosen the outstanding breeder by the Canadian Thoroughbred Horse Society. The Jockey Club of Canada named him its 1986 recipient of Man of the Year in recognition of his many accomplishments. He was also a respected member of the Board of Trustees of the Ontario Jockey Club and Chairman of its Executive Committee. Kinghaven, which Willmot founded in 1967, became one of the leading equine establishments in North America. It owned and bred four Queen’s Plate winners – Steady Growth, Market Control, With Approval and Izvestia. Kinghaven also bought and raised a fifth Plate winner – Alydeed. Two of Kinghaven’s five Canadian Horse of the Year champions, With Approval and Izvestia, swept the Triple Crown series in 1989 and 1990 respectively. Kinghaven’s other champions were Play the King, Alywow and the race mare Carotene, who won six Sovereign Awards. In all, seven millionaire horses were raised at Kinghaven in King City and the Caledon hills just north of Toronto. If you were to ask Willmot about the success of Kinghaven, he would have insisted that the credit should go to his son, David, who was Chairman and CEO of Woodbine Entertainment Group (formerly the OJC), farm manager Ian Black and his staff, and trainer Roger Attfield.

The Kinghaven racing stable was huge, earning more than $5 million in 1990. Right from the day the notion of Kinghaven Farms was hatched, Willmot wanted to breed his own stock. Buying good horses would be too easy. He preferred to develop a band of quality broodmares, breed them to the best stallions, and then give the resultant babies the last word in superb preparation. With Approval and Izvestia are examples. On the maternal side they both descended from Cool Mood, which won the 1969 Canadian Oaks for Kinghaven. At one time Kinghaven had a broodmare herd of nearly 100 and shares in 20 or so of the most illustrious stallions in Kentucky and Ontario, and owned a 660-acre farm and training centre near Ocala, Fla. 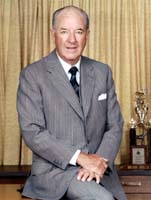