Charles (Chick) Lang’s rise to the top of his profession was nothing short of meteoric. At age 16 the “kid” from Hamilton, Ontario, became the leading rider in North America in 1921, just seven and one-half months after he rode in his first race at Havre de Grace, Maryland. Journalist C.J. Savage wrote at the time: “In May, Lang scored his first win for the stable of James Arthur. His rise from obscurity to fame is a record no other pilot in recent years can boast.” Lang won his North American riding championship after spotting Bunny Marinelli a “huge” lead. During one stretch at the Fair Grounds meet in New Orleans, Lang won 29 races in 27 days. He finished the season with 135 winners, well ahead of some of the elite jockeys in America – Earl Sande and Laverne Fator.

After winning the jockey championship some of his detractors intimated Lang was a flash in the pan. He had a lot of flash. “There were a few who contended Lang was just an ordinary rider, even after he won the 1921 championship,” wrote another turf historian. “But he has been riding even better this year than last against some of the best talent on the turf. For some mysterious reason the thoroughbreds nearly always do better for Lang than they do for the other boys. He will mount a habitual slow beginner and the nag goes to the front at once and stays there. He will get astride a horse known for his bad acting at the post and the rogue will act like a lamb.” 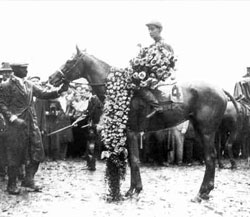 Lang almost repeated as the leading rider in North American in 1922. He lost out on the final day of the season when Mark Fator won three races at Tijuana, Mexico. Lang was inactive on the final Sunday of the year as his season had ended the day before at New Orleans. At Tijuana one of the jockeys aboard a favorite got off his mount so that Fator could ride him, which turned out to be the winning margin – 188 to Lang’s 187. It was the closest finish in the annals for leading jockey honors. That year Lang’s contract was sold by his mentor, James Arthur, to J.S. Gosden for a record $25,000. He also traveled to Toronto in 1922 for the King’s Plate and finished third on El Jesmar. In 1925 he won the Plate on Fairbank when he nosed out the favorite, Duchess. An historic first that year was the first broadcast of the Plate, described by W.A. (Bill) Hewitt on radio station CFCA.

Lang realized his “life’s ambition” in 1928 when he won the Kentucky Derby on Reigh Count, the champion three-year-old that season, winning six stakes races. Lang joined another Hamilton-born jockey, Robert Frederick (Brusher) Herbert, as the first two Canadian-born jockeys to win America’s most famous race. Herbert won the 1910 Derby on Donau before heading to Germany to ride for Kaiser Wilhelm. The exclusive “Canadian” club includes Smokey Saunders (Omaha), who was born in Montana but raised in Alberta, Ron Turcotte (Riva Ridge and Secretariat) and Stewart Elliott (Smarty Jones).

Plagued with weight problems, Lang retired following his big year of 1928. He shipped to England, where her rode in several races. Besides his Kentucky Derby win, Lang won numerous stakes races, including the Jockey Club Gold Cup (1923 and 1928), Saratoga Cup, Gazelle, Dwyer, Belmont Futurity and Lawrence Realization. He made a brief comeback in 1932 and retired with 601 wins. He turned to training at east coast tracks in the 1930s and 1940s and died in 1947 at age 42 at Wilmington, Del.