The selection of Nealie Oliver to the Canadian Horse Racing Hall of Fame was long overdue. One of the pioneers for Western Canadian harness racing, Oliver compiled an impressive record of achievements. An Ontario native, but long-time resident of Beechy, Sask., Oliver dominated the prairies’ major harness racing offerings with amazing consistency. On no less than five occasions, he captured the Western Canada Derby, one of the west’s most difficult tests. Born in 1904, Oliver, like most horsemen of his day, was an owner, breeder, trainer and driver. Never boasting a large stable of horses, he first went on the road in 1956 and played a large role in establishing the traditional small meets across the prairies which exist today. Perhaps his most amazing accomplishment came in 1967 at the age of 63 when he won the North American UDRS championship with a remarkable .507 average with 52 wins in 140 starts. The horses for which he will always be remembered include Dixie Lee Harvester, Birdies Gal, Dixie’s Adios and Queens Champ C.

He also enjoyed success as a breeder with Dixie’s King (p, 1:59.3), the first Adios Pick progeny to take a sub-2:00 time record and also the first ever to win $100,000. The apple of his eye, however, was Queen Axworthy, an 18-year-old broodmare he purchased for $150. She would go on to foal 1964 Derby winner Queens Champ C. In effect, she was the foundation mare for the Oliver tradition of winning. His son, Elroy, who had an extensive breeding operation near Edmonton, continued the Oliver tradition in harness racing. In 1989 Nealie’s Ten Spot, owned by Nealie’s Stable, won the $90,000 final of the Nat Christie Memorial in 1:54.4. A true pioneer horseman, Nealie Oliver earned the respect and admiration of his fellow competitors for his devoted interest and participation in the sport. Prior to the decline of harness racing in Saskatchewan, the Nealie Oliver Memorial was contested at Queensbury Downs in Regina. 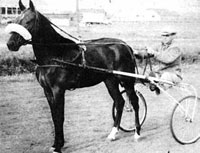