Vice Regent’s relative lack of success on the racetrack, which was largely due to a freak accident and injuries, completely overshadowed his brilliant performance at stud for Windfields Farm. The imposing chestnut son of Northern Dancer and Victoria Regina, who was passed over by buyers at E.P. Taylor’s annual pre-priced sale of yearlings in 1968, was Canada’s leading sire for 13 years. Of his 400 foals, 60 were stakes winners.

Vice Regent was constantly under scrutiny when he arrived at the racetrack. After all, he was a handsome full-brother to Viceregal, who was named Champion 2-Year-Old Colt in 1968. But after five races, two of which he won, Vice Regent was retired. Ten years later his son, Deputy Minister, was voted North America’s top Two-Year-Old Colt and Horse of the Year in Canada and would twice become North America’s leading sire with a lengthy string of champions.

His progeny have proved adept at sprinting and routing, and successful on dirt and grass. In fact, Fraud Squad was voted Canada’s Top Sprinter in 1983, while Bounding Away was voted Champion Older Grass horse in 1984. In 1988 Vice Regent was represented by Canada’s leading three-year-old colts, Regal Classic and Regal Intention. Regal Intention won the Queen’s Plate, relegating his stablemate, Regal Classic, to second. Regal Classic, in turn, defeated Regal Intention in the Prince of Wales. A grandson, King’s Deputy, won the Breeders’ Stakes, thus providing a Vice Regent sweep of the Canadian Triple Crown. 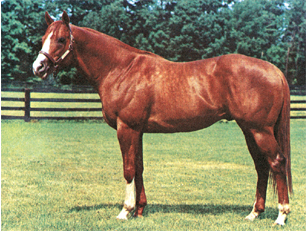