It was appropriate that Adios Pick should join his owner, Dr. Brad Gunn, and his full sister, Dottie’s Pick, in the Hall of Fame. While his sister would become a world champion pacing mare and prominent broodmare, “Pick” would gain fame as the foundation stallion for the rebirth of harness racing in Western Canada in the 1960s and 1970s. Adios Pick was a foal of 1954 and was bred by the Armstrong Brothers and Del Miller. He was by the immortal Adios, and out of the prolific mare Pick Up. Purchased in 1960 by Dr. Gunn after an injury prematurely ended his racing career, Adios Pick soon demonstrated his ability to sire speed. Eight of the nine starters in the 1964 Western Canada Pacing Derby were sired by Adios Pick. The outsider finished ninth.

Not only were his offspring fast but they were well-mannered and good gaited. Adios Pick’s feats in the stallion ranks include seven Western Canada Pacing Derby winners from his first eight crops; the first 2:00 mile in Alberta by a prairie horse, Mark Majestic, in 1975; the first Alberta-bred horse to break the 2:00 barrier in that province, Senga Swap, in 1977 and the first Canadian standardbred  to sire the winners of more than $1 million in a season.

In all, Adios Pick sired 620 winners, including 36 winners of $100,000 or more, and his offspring amassed earnings of $18.8 million. His fastest son was Roarin Snortin, who set a Canadian-bred record for sophomore pacers in 1983 when he stopped the teletimer in 1:55.4. Adios Pick also demonstrated his ability to pass on speed with his female offspring. He is the sire of the dam of Senga Axon, 1982 Alberta Horse of the Year and the sire of the second dam of the $1.1 million winning Canadian-sired horse, Hy Class Minbar, p.1:55. 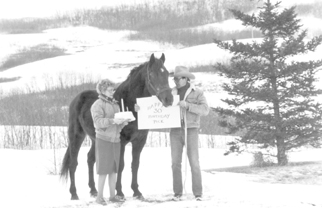