Lawrence (Larry) Regan, who was born in Stratford, Ont., in 1931, but raised in Toronto, was a successful owner on the Ontario thoroughbred racing circuit for 50 years. Operating independently and in partnership with is brother, Jim, the white and green Regan silks graced the jockeys of stakes-class horses Dawes Road, Fly Ash, Road of War, Lansing Cutoff, Trusty Forester, Sgt. Hunt and Admiral Twit.

Elected president of the Horsemen’s Benevolent and Protective Association in 1972, it was in this venue where he played a leading role in the thoroughbred industry. He held this position for 24 years. In 2000, after a six-year hiatus, Regan was re-elected president for a three-year term. In 2007 he was back on the board as a director. Regan also spent 10 years as president of the HBPA’s national body. In 1987 he was honored with a Sovereign Award by The Jockey Club of Canada as its “Man of the Year.”

Regan worked, and sometimes battled, with the Ontario Jockey Club (now Woodbine Entertainment Group) and the government to bring improvements beneficial – like workmen’s compensation for backstretch employees – to racing and those who toil endlessly in it. Under his stewardship in 1977, the first “letter of intent” was signed by both management and the horsemen giving them a set percentage of the track’s share of the pari-mutuel handle.

Regan was also involved in negotiations to bring the Breeders’ Cup to Woodbine in 1996 and the tri-partite cooperation between racing associations, the Ontario Lottery and Gaming Commission and horsemen to accept the principle of the marriage between casinos and race tracks.

Whether it was working for a full-time “B” circuit at Fort Erie, expanded inter-track wagering opportunities or the petitioning of government for its thoroughbred improvement program, Regan has continually sought to improve the business prospects and the humanitarian conditions for his people.

He was also one of the founding directors of the Avelino Gomez Foundation, the Canadian Horse Council, the E. P. Taylor Research Foundation and a member of the Ontario Racing Commission’s Advisory Board until its dissolution in 1983. 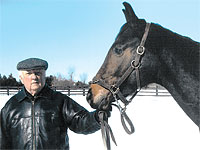