As with many individuals elected to the “Builders” category, many of their accomplishments and achievements are lodged in the memories of the people. Not so with Walter Sprague. During his tenure as director and president of Edmonton Northlands, he gave countless hours to the improvement of thoroughbred racing in Alberta. Particularly in Edmonton, he has left a legacy which is there for all to see. Sprague was a shareholder of the Edmonton Northlands beginning in 1957, a director from that same year until 1971, and served as president in 1968 and 1969. In 1972, he was made an Honorary Life Director of the company.

Included in his successes was establishing Northlands as the home of the Canadian Derby. His personal interest and energy did much to make this race one of the major races on the calendar today. He was also responsible for and personally guided the construction of the clubhouse addition to the facility. Included in his accomplishments was the encouragement and support of owners to improve racing in Alberta.

As owner, he was equally successful winning the Canadian Derby in 1962 with Western Morn. Besides being a driving force for thoroughbred racing, he was an exemplary community leader. He served as president of the Edmonton Chamber of Commerce, the Kiwanis Club, Edmonton Eskimo Football Club and was a member of The Jockey Club of Canada. 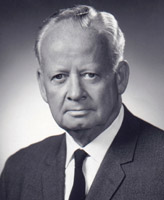