Don MacBeth dreamed as a child of making it into the “Big Leagues”. The native of Red Deer, Alta., never dreamed it would be the “Big Leagues” of thoroughbred racing rather than the National Hockey League. Although he learned to ride in Western Canada, winning his first race at Lethbridge, Alta., in 1967, MacBeth was a bigger name in the United States than Canada.

He performed with great distinction in New York, Florida, New Jersey, winning riding titles at Aqueduct, Monmouth Park, Atlantic City and Hialeah in the 1970s and early 1980s. During his career he won 2,764 races from 22,435 mounts while amassing in excess of $40 million in purse earnings. “I’ve always been proud of the fact I rode 100 per cent”, said MacBeth. “Winning to me was everything. I played hockey that way. I may not have been the best hockey player, but I played hard.” He was respected for his determination and honesty, combined with great athletic ability. 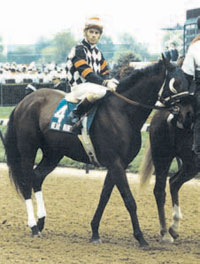 In the inaugural Breeders’ Cup at Hollywood Park, California in 1984 he earned the distinction of winning the first ever Breeders’ Cup race – aboard Chief’s Crown in the Juvenile. Some of his more memorable mounts and wins were aboard Eclipse Award winners Deputy Minister, who won Horse of the Year honors, and Chief’s Crown. MacBeth also rode “The Chief” to victory in the 1985 Marlboro Cup. MacBeth was aboard Half Iced, the 1982 $1 million Japan Cup winner. He captured the Suburban Handicap at Aqueduct, N.Y., three times in the 1980s Temperence Hill, Silver Buck and Vanlandingham.

One of racing’s great ambassadors, MacBeth earned two of the most coveted awards for arider. In his last public appearance at a racetrack, the 37-year-old was presented with the George Woolf Memorial Award, presented each year at Santa Anita to the rider who personifies the highest standards of professional and personal conduct, on and off the track. Shortly afterwards, March 1, 1987, he died following a year-long battle with lung cancer. That June at Woodbine he was awarded posthumously the Avelino Gomez Memorial Award for significant contributions to Canadian racing. He was not only one of the best Canadian jockeys but simply just one of the best ever. 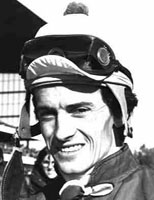