Voted Aged Trotter of the Year in 1983 in the annual CTA poll, Bridger was certainly one of this country’s premier trotters in the 1980s. He was a world champion and his illustrious four-year campaign made him a fan favorite wherever he raced, both for his ability and dependability. Bridger was a regally bred son of Armbro Jet and the Speedy Crown mare Mygal Haw Lea, and was a foal of 1979. He was bred by William Stuart of Ilderton, Ont., and owned by Martin Starr of Toronto and Lawrence Ball of Oakville.

Twice he represented Canada in the International Trot at New York’s Roosevelt Raceway, which brought together the best-aged trotters in the world. Bridger, however, reserved his greatest accomplishments for local racing fans at Greenwood, where he won the Maple Leaf Trot in 1983, winning his heat and final for John Campbell, and repeating in1984 by taking both heats for Ron Waples. In the 1984 edition he set a world record of 3:56.3f for the combined time of two heats on a five-eighths mile track.  In 1984, when he took his lifetime mark of 1:57.2f, he broke Greenwood’s trotting record.

Bridger not only raced and won all over the country, but he did it in record setting fashion. When he retired following the 1984 season, his name was found in the record books at Hawthorne in Chicago, Greenwood, Mohawk, Elmira, London and Sudbury. In 88 lifetime starts he won 42 of them for earnings of $512,172. At age two Bridger won OSS events at Elmira and Kawartha Downs. At age three his stakes wins included the Flamboro Breeders, Ontario Harness Horsemens and OSS events at London, Windsor, Sudbury, Kingston and Kawartha Downs. At five he won the Dygert Memorial and two legs of the Tie Silk Series. The son of Armbro Jet was truly one of the first international stars produced by the Ontario Sires Stakes program 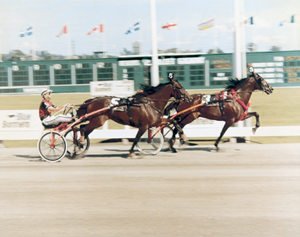