Skippy Day Brook earned her fame as a broodmare in the ownership of Hall of Fame trainer Clint Hodgins. She was a foal of 1950 and was a member of the first crop by the legendary pacing stallion Adios, who stood at Del Miller’s Meadowlands Farm. Bred by Jean Dougherty of Hackensack, N.J., she was winless in 32 starts. But her offspring more than made up for their mom’s lack of success on the track. Of her 10 foals, the most successful was her second to last, Terry Parker, who earned $236,000 and dominated the 3-year-old colt and gelding divisions of the inaugural OSS program in 1974.

He won nine OSS events, the Supertest Stakes and Ontario Harness Horsemen’s Stakes and was second in the Canadian Standardbred Futurity. A daughter, Patricia Rhythm, had an impressive stakes career, which included wins in the Reynolds Memorial and Princess. She is the dam of stakes winner Bye Bye Pat and Bye Bye Mike. Descending generations of this mare by Adios have produced the dams of Good By Design, Almahurst Sport and Albert Hanover. Corinne, the 1969 foal of this great broodmare, was a New York Sires Stakes winner. Another daughter, Skippy Rhythm and the Bye Bye Byrd son Skippys Pride C have been responsible for the most 2:00 speed from Skippy Day Brook. Skippy Rhythm produced Skipper Thorpe, Inside Scoop and Ultramar.

Skippys Pride C sired five winners of $100,000 or more, including Autumn Glo, Southgate Pride, Ronald and Merrywood Sara. Jasons Girl, the 1986 OSS winning 3-year-old filly, carries three crosses of Skippy Day Brook’s blood in her extended pedigree and is an example of the impact Skippy Day Brook had and will continue to have as more of her grandchildren find their way to the winner’s circle. 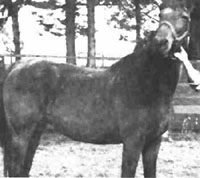