At the age of 17 Lew James was introduced to the sport of harness racing. While by his own admission “we didn’t do so well that day” there is no doubt he was a quick learner. He gained his first major recognition in the 1930s while working for Alex Parsons’ Pine Ridge Farms in London, Ont. It was there he assisted Bill Herbert in the training and driving of the Pine Ridge stock, which included 1943 Canadian Pacing Derby winner Pine Ridge Alex amongst other notables of that era. James was in the bike that day at New Hamburg. He also drove the Pacing Derby winner The Diplomat for Parsons in 1949. Of all his drives, he seemed to express the most satisfaction with his catch drive in 1952 behind the immortal Good Time at Buffalo Raceway. Called to replace Frank Erwin that day, Lew and Good Time responded with a track record clocking of 2:01, beating Del Miller and Direct Rhythm in the process.

Early in the 1950s, due to a number of serious injuries, he decided to embark on a new career. He went to Ottawa’s Connaught Park where, after just one year’s apprenticeship as clerk of the course, he became Race Secretary. After ten years in that position, he was hired by The Ontario Jockey Club in a similar capacity. He remained in that position until his retirement in 1976.

He is most remembered as the first person to write race conditions for non-winners of so much in their last number of starts. Unable to remain inactive, he then served a year as patrol judge and was race secretary for the inaugural meeting at Sudbury Downs.

During his more than 20 years as a driver, “Lewie”, as he was affectionately called by his peers and fans alike, set track records virtually everywhere he competed. From the United States to the smallest of Ontario ovals, his immaculately tailored silks could be found. Lew James, whether it be for his accomplishments on the track or as a race official, was credited with helping to bring standardbred racing out of the fair grounds into the mainstream of the modern era. 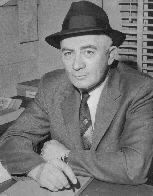