Jack Short was the voice of racing in British Columbia for 43 years. During that time span he called approximately 50,000 races. Retired since 1982, he maintained a direct involvement in his sport as a well-respected and valuable member of the British Columbia Racing Commission. His career started in 1934. He was the race caller at Vancouver and Victoria tracks – Lansdowne, Brighouse, Colwood, The Willows and Hastings. His vibrant voice in combination with his ability to talk fast and clear became an enticement in itself for listeners to come out to the races and see the real thing. 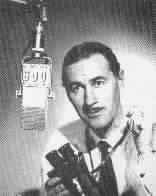 Active in the 1920s as a jockey, Jack became a jockey’s agent after outgrowing his profession. In 1933 he started doing race recreations along with dubbed in sound effects for radio station CKMO. He was not only “a true pro” during the call of a race, but was well known as a regular guest speaker for benefit shows on behalf of the racing industry. It was suggested that Jack had spoken to virtually every service club in southern British Columbia, not to mention his concern and involvement with the plight of native Indians. When he was inducted into the Canadian Horse Racing Hall of Fame, it was also noted that horsemen took great honor in welcoming “Chief Flying Voice”, as he was referred to by the native Indians when they made him an Honorary Chief.