During a meteoric career, which began at Woodbine in the autumn of 1968, Sandford Desmond (Sandy) Hawley accomplished feats that would quickly rank him among the greatest jockeys in the history of thoroughbred racing. Anybody who followed the exploits of the young man from Oshawa, Ont., from the $2 bettor to the owners and trainers who shared in his triumphs, will understand why Sandy earned his accolade. A consummate professional and one of Canada’s most distinguished ambassadors, Hawley rapidly established himself a future champion when he led all apprentices in North America with 230 wins in 1969. 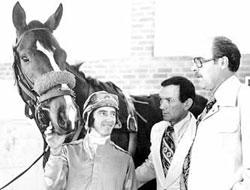 He was American’s leading jockey in 1970 when his mounts carried him to 452 wins at tracks from Canada to Florida, New York, California, Maryland and Illinois. Runner-up to Laffit Pincay in 1971, Hawley bounced back in 1972 to gain riding honors with 367 wins. That season saw him author an indelible chapter in the history of race-riding when he booted home 42 winners in a 10-day span at Woodbine. During that period he had one marvelous afternoon when he won seven of nine races. Hawley’s magic wand would never be more evident than in 1973 when he became the first jockey in the world to win more than 500 races in a single season, shattering Bill Shoemaker’s supposedly “unbeatable” record of 485 victories. He finished with 515 that year, an achievement that earned him a “special Eclipse Award of Merit.” He earned his first Lou Marsh Award as Canada’s outstanding athlete that year.

Born on April 16, 1949, the slender kid, who once excelled as a wrestler in high school, began his racetrack career in 1966 walking “hots”. He was employed as a groom and hot walker for trainer Duke Campbell, who brought him along carefully. Sandy still credits Campbell as one of his greatest sporting influences. In those days he earned $73 a week. A few years later he grossed $250,000 a year. Hawley’s first win came on October 14, 1968, on Fly Alone, owned by Tom Hays and trained by Campbell. His four wins that fall would catapult him to fame the following year when he became North America’s leading apprentice.

He is one of three riders to win the Queen’s Plate four times. His first two rides in this race produced victories on Almoner and Kennedy Road in 1970 and ’71. Hawley won again in 1975 on L’Enjoleur and in 1978 on Regal Embrace. His record in the Canadian Oaks is unprecedented, winning the premier race for fillies eight times, including five in a row. He also won the prestigious Washington International at Laurel, Md., in 1975 and ’76 with no biliary and Youth. Hawley twice won Canada’s major turf race, the Canadian International in 1976 and 1979 with Youth and Golden Act. 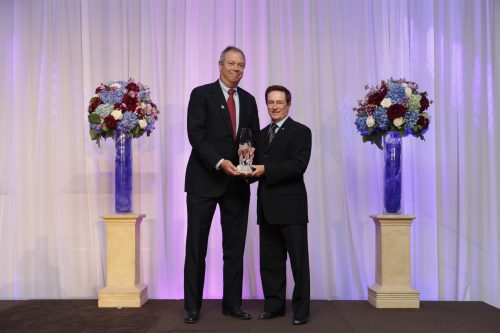 When Secretariat was inducted to the CHRHF, Hall of Fame Jockey Sandy Hawley had the honour of making the presentation to Chris Tweedy, son of Penny Chenery.

Hawley is one of the few men honoured by his colleagues in two countries. He was the recipient of the Avelino Gomez Memorial Award at Woodbine in 1986. In 1976 he was the leading rider at Santa Anita in California and was named winner of the prestigious George Woolf Memorial Award. During the 1970s and ’80s he spent most winters riding on the West Coast. During the winter of 1972-1973 Hawley left Woodbine to try the tough Southern California circuit and was immensely successful. He thrived on the West Coast, winning thousands of races and numerous graded stakes victories.

The 1976 season was undoubtedly Sandy’s greatest. In addition to the Woolf Award, he earned an Eclipse as North America’s top jockey and was awarded his second Lou Marsh Trophy. He also received an honor that transcends sports when he received the Order of Canada for outstanding accomplishments by a Canadian citizen. In 1978 he won a Sovereign Award as Canada’s most outstanding jockey and then made a permanent move to California, a move that lasted until 1988 when here turned to Woodbine and Canada for good. In 1992 he was inducted into the National Museum of Racing at Saratoga, N.Y. Award committee chairman Joe Hirsch said, “… Sandy Hawley is more than a rider of winners. He has conducted himself in a gentlemanly fashion since his first day at the racetrack. He personifies the highest standards of his profession … he exemplifies grace under pressure and has the admiration of the entire racing community.”

Hawley’s star-filled career included numerous serious injuries from spills. In 1995 he was badly injured at Woodbine when his horse flipped over on him during a post parade. He suffered broken ribs, a cracked pelvis, bruised shoulder and injuries that required major surgery twice on his urinary tract. This setback, however, was minor compared to his winning battle with cancer. Beginning in 1987 he underwent treatment each winter in California for malignant melanoma. Hawley also underwent lung surgery in 1993.

At Woodbine he ruled supreme, winning the riding title 18 times. He was best at Fort Erie on 13 occasions and nine times at Greenwood. He was also tops in Ontario nine times and in Canada his reign included eight titles. Four times he led all riders in North America. On July 1, 1998, Hawley concluded a memorable career when he finished third on Terremoto in the Dominion Day Stakes at Woodbine. His final riding stats showed he had won 6,449 races from 31,455 mounts, whose purse earnings were $88.6 million.
Or was his career over – stuck at 6,449 victories?

More than 10 years later Hawley made a “one-race” comeback when he captured the Living Legends race at Santa Anita, a track he enjoyed many wonderful afternoons in the 1970s when he was the leading rider in Califonria. On Saturday, October 18, the 59-year-old Hawley added one more win to his career total – his 6,450th – when he guided Tribal Chief to a 6 ½ length victory over some of the greatest jockeys in North America. The Living Legends’ event attracted retired Hall of Famers Angel Cordero Jr., Jacinto Vasquez, Julie Krone, Pat Day, Chris McCarron, Jerry Bailey and Gary Stevens. These big name jocks had won over 49,000 races and more than $2 billion in purse earnings during their prolific careers.

Riding the 5-to-2 favorite, Hawley made it look easy as he opened up a two-length lead coming out of the gate and was never challenged. For Hawley the win was significant. “I really wanted to win my last race to give me a nice round number. I had been stuck on 6,449 wins for over 10 years.” To get in shape Hawley prepped for two months for the Legends’ event by going to the gym, galloping a few horses at Windfields Farm in Oshawa and breezing a couple of horses over five furlongs at Woodbine. “I didn’t know if I was fit enough. I’d weighed 122 pounds. The weight just poured off. I rode this race at 110.”

Hawley, who is an on-air racing analyst and racing ambassador for Woodbine Entertainment, isn’t considering un-retiring. “It was exciting. It was fun. But Woodbine is treating me great. I love the job I’m doing now. I wouldn’t want to do anything else.” 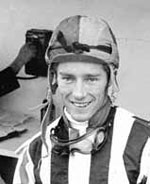