In the early 1980s the “Travellin’ Man” logged more miles than any trucker on the 401. When he called it a career at age five the big, flashy roan gelding had a bankroll of almost $1.2 million, second only to Sunny’s Halo for Canadian breds at that time.

Frost King’s name was taken from a discarded refrigerator near the farm north of Toronto where he was raised. He won stakes races in Ontario, Manitoba and Alberta and visited many of the leading tracks in the U.S., winning stakes at Keeneland and Chicago’s Sportsman’s Park and placing in major events in Massachusetts, Illinois and Michigan. Frost King also earned frequent flyer points as a 3-year-old in 1981 when he represented Canada in the inaugural running of the Japan Cup in Tokyo, finishing second by a length to Mairzy Doates. He was also Canada’s first entry in the Budweiser Million.

Frost King was bred and co-owned by Ted Smith and Bill Marko, a Sovereign Award winning trainer. Twice Smith offered the son of Ruritania for sale – as a weanling at Keeneland and again at the CTHS yearling sales in Toronto. Both times the bidding failed to reach Smith’s $10,000 reserve and he took him home to race for his stable. Frost King was Canada’s champion 3-year-old in 1981 and swept honors the following year when he was named Horse of the Year, champion grass horse and older horse. During a remarkable career of 55 starts he was never worse than third on 40 occasions. Of his 27 victories, 21 came in stakes races.

At two he won the Cup and Saucer Stakes and the Winnipeg Futurity. In 1981 he was beaten less than a length in the Queen’s Plate but captured the affection of fans and bettors, winning the Canadian Derby, Toronto Cup, Bunty Lawless, Achievement, Col. R.S. McLaughlin, Queenston and Plate Trial Stakes. Good horses have the ability to sprint and carry top weight, which the “Travellin’ Man” did often as a 4-year-old in 1982. That year he was assigned 130 pounds or more in eight of his starts, often spotting opponents from 10 to 15 pounds. Frost King won both the Bold Venture Handicap and the Bunty Lawless under 132 pounds for regular jockey, Lloyd Duffy. He carried 131 pounds in the Jockey Club Cup.

Frost King carried his class and durability at age five, travelling to Western Canada, where he set a track record at Northlands Park in Edmonton, Kentucky and Detroit, winning four more stakes races. An ankle injury forced his retirement. 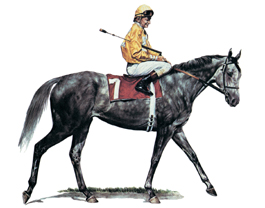