He was aptly named “The Pacing Machine.” He was “The People’s Horse,” the legendary Cam Fella, who after his retirement from stud was taken on a tour of major raceways and small-town tracks across North America to raise money for charity, attracting large crowds to greet him at every stop.

Cam Fella was Canada’s standardbred equivalent to thoroughbred’s Northern Dancer. Like “The Dancer”, Cam Fella was not only a great racehorse, but an incredibly majestic sire of champions and world record holders. He did more than any horse to focus public attention on harness racing during the 1980s, challenging all comers at tracks across North America. His feats endeared him to countless fans, many of whom formed an entourage that traveled to wherever Cam Fella raced.

On the track he had the will to overcome seemingly insurmountable leads by his foes. He simply refused to be beaten. His regular driver and trainer, Pat Crowe, said: “losing just wasn’t in Cam’s book.” Dave Perkins in The Toronto Star wrote, “He was from his own competitive planet, known for going only (but absolutely) as fast as necessary. He did his winning face-to-face, looking the competition in the eye and not letting it past.” His exploits became legendary. Consider his race record, which ended in 1984 on the crest of 28 consecutive victories, and earnings of over $2 million, which at the time made him the richest pacer in history.

Canadian trainer Doug Arthur paid $19,000 for the son of Most Happy Fella at the 1980 Tattersalls Sales in Lexington, Ky. At two the colt won three of 11 starts, breaking stride and being disqualified on three occasions. A 2:00.2f win in his final start of 1981 in the Valedictory Series at Greenwood Raceway prompted Norm Clements of Uxbridge and Norm Faulkner of Stouffville to buy the colt for US$140,000. For the next two years he won 58 races in 69 starts. In 1982 and ’83 he was voted Horse of the Year by both the USTA and the CTA. His wins at age three included the Cane Pace, Queen City Pace (now called the North America Cup), Monticello-OTB Classic, Prix d’Ete, Messenger, Provincial Cup and the Confederation Cup. At four his 30 wins in 36 starts included the Stewart Fraser Memorial, Canadian Pacing Derby, B.C. Classic, World Cup, Graduate and Driscoll Series, Frank Ryan Memorial, American-National Maturity, Blue Bonnets Challenge Cup, Mohawk Gold Cup and U.S. Pacing Championships at Roosevelt and Sportsmans Park. 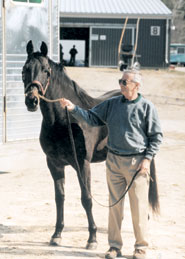 Retired to stud in New Jersey, Cam Fella became one of the greatest progenitors in the history of the standardbred horse. He sired 1,002 foals. His offspring accumulated $106.9 million and included 16 winners of at least $1 million and 268 performers that earned $100,000 or more. His millionaires include Eternal Camnation, Presidential Ball, Cams Card Shark, Precious Bunny and Camluck. His daughters proved to be prolific producers as well. Jennas Beach Boy (p,4, 1:47.3) and winner of $1.9 million is out of one of Cam’s daughters. Cam’s stud career ended in 1997 when he had to be gelded because of cancer. To ensure that Cam Fella’s “unparalleled contributions to the sport are never forgotten,” Standardbred Canada established “The Cam Fella Award” to recognize extreme effort and dedication to Canadian harness racing by an individual or group. 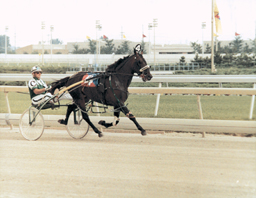