The first filly to win the most coveted race for 3-year-old pacers in North America, the Little Brown Jug, was Fan Hanover, owned by Dr. J. Glen Brown of Brampton, Ont. The Jug victory was the highlight of a brilliant racing career that included Horse of the Year honors, world records, 45 wins in 72 starts and earnings of just under $1 million. 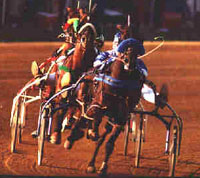 Dr. Brown selected the foal by Albatross-Farm Norah, from the Hanover Shoe yearling consignment. Under the tutelage of Glen Garnsey, Fan Hanover dominated the pacing fillies in the early 1980s. As a juvenile she won 16 of 19 starts, which included wins in the Blue Bonnets Grand Circuit Stakes, Matron, Hanover Filly, Pennsylvania Sires Stakes at Liberty Bell, Canadian Series legs at Blue Bonnets, Quebec, Windsor and Mohawk, the Canadian Series final and Trillium Series at Kawartha Downs, Greenwood, Windsor, Western Fair and Dresden. Two of her three losses came in the Miss Vera Bar Stakes and the Breeders Filly Stakes. She also became a world champion by recording the fastest mile at that time, 1:56.4, for a 2-year-old pacing filly on a 5/8ths-mile track.

In addition to the Little Brown Jug, her stakes credits at three included the Matron, Fleur de Lys, Ladyship, Lady Maud, Battle of Saratoga, Tarport Hap Pace, Reynolds Memorial, Bronx Filly Pace, Bluegrass, Shady Daisy and Pennsylvania Sires Stakes at The Meadows. Fan Hanover won 17 of 23 starts and posted a 1:56.3 on a half-mile track and 1:55.3 on a 5/8ths-mile track, which placed her in the world record tables for the fastest miles by a 3-year-old filly on tracks those sizes. She won another 12 races at four, including the Roses Are Red, Mohawk Gold Cup and the Milton. With Garnsey in the bike at The Red Mile in Lexington, Ky., she was clocked in 1:50.4 in a time trial. That day, Fan Hanover became the fastest female in standardbred history and second fastest regardless of sex.

The daughter of Albatross was voted Horse of the Year by the USTA for 1981, only the fourth filly or mare to be accorded the honor since the award was inaugurated in 1947. She was voted the Canadian Trotting Association Horse of the Year in both 1980 and 1981. Her other honors included CTA 2-year-old pacing filly of 1980, USTA and CTA 3-year-old champion pacing filly of 1981 and USTA and CTA aged pacing mare the following year. Fan Hanover produced 10 foals, including Bold Hope, who had a mark of 1:51.1 at age four. 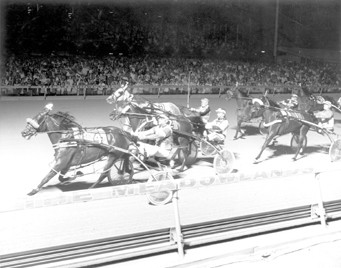