In 1983 Ralph Hanover became the seventh standardbred in history to win the Pacing Triple Crown, a season in which he became a world champion and earned “Three-Year-Old Pacing Colt” honors in both the USTA and CTA polls. The son of Meadow Skipper was purchased in 1981 from the Hanover Shoe yearling consignment by men later inducted into Canada’s Hall of Fame, trainer Stew Firlotte and trainer-driver Ron Waples, and campaigned under their ownership, along with members of the Pointsetta Stable and Grants Direct Stable (Richard Dinner and Norman Keyes). 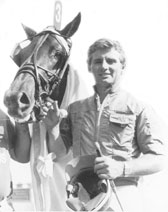 As a 2-year-old, Ralph Hanover won seven of 15 starts, including the Bluegrass Stakes in Lexington, Ky., where he took a record of 1:54.1. He also won Canadian Juvenile Circuit at Greenwood and Blue Bonnets and an elimination of the Peter Haughton Memorial at The Meadowlands. He was voted the CTA’s “Two-Year-Old Pacing Colt” of 1982. In 1983 he established a single-season earnings’ record for a standardbred when he banked $1,711,990 while winning 20 races and finishing second four times in 25 starts. In addition to the Triple Crown events- the Little Brown Jug, Cane Pace and Messenger Stakes – Ralph Hanover won the Queen City Stakes (later renamed the North America Cup), Geers, Burlington, The Meadowlands Pace, Adios Stakes, Prix d’Ete, Simcoe, Tattersalls Pace final and eliminations of the Oliver Wendell Holmes Pace and Bluegrass. During that season, he set world records for the fastest mile (1:54) by a 3-year-old pacer on a 5/8ths-mile track and the fastest ever (1:55.3) on a half-mile track.

He retired with career earnings of $1,815,395 and was syndicated by Almahurst Farms of Lexington, Ky., for approximately $7 million. At stud Ralph Hanover produced 801 foals, including 46 winners of $100,000 or more and 24 performers that took records of 1:55 or faster. His offspring included Firstline Bugsy, Hubris, Fortune Destiny and Stonewal Almahurst. Production of his daughters include the $1.1 million winner Lady Graceful, Margies Tyle and Nuclear High. 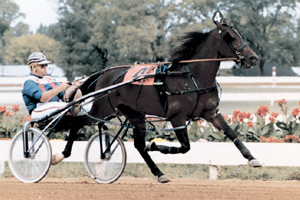