One of the “pioneers” of horse racing in Canada, but especially Quebec, Lucien Bombardier devoted his entire life to the industry. Born and raised near Bedford, Que., Bombardier retired in 1992 after 16 years on the board of directors of the Canadian Standardbred Horse Society. The following year, at age 86, Bombardier became the first honorary director of the CSHS. His appointment by the board of directors in January 1993 was in recognition of achievement and contribution to the Society and the standardbred industry. Bombardier was also honored in 1985 when he was recognized for his life-long devotion to the industry when he was the recipient of the Society’s General Achievement Award for his excellence, leadership and contribution to the breeding industry and by his election into the Canadian Horse Racing Hall of Fame the following year. 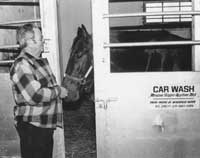 Bombardier started training and driving harness horses at agricultural fair meetings in Quebec at an early age. In the early 1940s he left a business career to open a large racing stable at Richelieu Park in Montreal and in 1953 he accepted an executive position with Blue Bonnets (now Hippodrome de Montreal). During 25 years in racetrack management he played a role in developing many changes and innovations that helped make harness racing a major sport industry and earned him an enviable reputation on both sides of the border. He also served as a director of Harness Tracks of America and the Canadian Trotting Association.

At age 68 Bombardier retired from Blue Bonnets and embarked upon a new career when he became an executive with Angus Farms in Bedford, Que., one of the province’s most successful breeding establishments. Bombardier died in 1995 and is honored each year at Hippodrome de Montreal with the running of the Lucien Bombardier Stakes for 2-year-old pacing fillies.