Although tens of thousands of 2:00 miles have been recorded in the decades since that July 21 evening in 1959 at Montreal’s Richelieu Park, Mighty Dudley will forever hold a special place in Canadian harness racing history when he became the first horse to accomplish this feat (1:59.3) on Canadian soil. The record-breaking performance occurred in the Canada Cup Pace against a field that included some of the best pacers in North America at that time – Champ Volo, Great Adios, Captain Wright and Chief Maid. With trainer and co-owner Keith Waples in the sulky, Mighty Dudley stopped the teletimer in 1:59.3 to earn himself a permanent place in the standardbred record books. Waples co-owned Mighty Dudley with Joseph Giard of Montreal. Early that season Giard wanted Waples to sell the horse and when Waples advised him not to sell, Giard said, “Why don’t you buy a half interest in him?” Waples did. Two weeks prior to the then magical mile, Dudley and Waples had taken a second off the Canadian pacing record when they combined for a 2:00.1 effort in the Canada Pace Series on Richelieu’s half-mile oval. 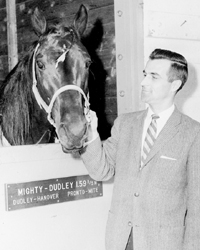 A son of Dudley Hanover from the mare Pronto Mite, Mighty Dudley was a 4-year-old at the time of his record mile and in 22 starts that year won five and was in the money on nine other occasions. Three times that season he was runner-up to Bye Bye Byrd, one of the best free-for-all pacers in North America in the 1950s. At five he won the final of the Canada Pace Series at Richelieu and was third in the International Pace at Yonkers, N.Y. Although the first 2:00 performance is what most people remember him for, Mighty Dudley went on to become a top invitation and free-for-all pacer. At the time of his retirement he had earned in excess of $105,000, which like his 2:00 performance is common today, but at that time was truly an achievement.