Tacony became the first Canadian-bred horse to be recognized as a world champion when he defeated the reigning “Queen of the Turf”, Flora Temple, on July 14, 1853. A foal of 1844, the 9-year-old roan gelding won all three mile heats at the Union Course, Long Island, N.Y., the fastest being 2:27, which equaled the trotting record. He was driven by William Woodruff. His brother, the famed horseman and author, Hiram Woodruff, handled Flora Temple. In this race the two long-time foes were under harness (behind a wagon). In his book The Trotting Horse of America, Hiram wrote, “As soon as Flora had defeated Highland Maid and Black Douglas, she was matched against Tacony, mile heats, three in five. His reputation was high, but more particularly as a saddle horse. He had trotted two consecutive heats that way of going, against Mac, in 2:25 ½ each.” He added that the match created a vast amount of interest and attendance was large. “The gelding was an uncommon good horse that day.”

Tacony and Lady Suffolk were considered to be the top trotters under saddle at this time and the battles between Tacony and Mac under saddle became a legend and was the subject of a famous Currier and Ives print. During this era in the evolution of standardbred racing, when horses attempted to achieve the coveted 2:30 mark, racing vehicles were a far cry from the featherweight affairs of today. They were unwieldy, high-wheeled contraptions, and often with four wheels.

Tacony was bred by Paul Trompeau , who lived near Belleville in Prince Edward County, Ont. In 1850 he was brought to Bucks County, Pa., in a drove and sold to a man who lived near Philadelphia. Tacony was by Sportsman, a son of famed sire Tippoo, and out of a chestnut mare by Shakespeare. The mare was bought by a local preacher from a sale of army horses following the War of 1812 between Canada and the United States. 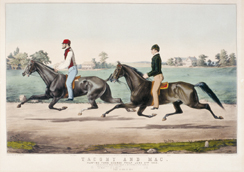