For three decades Bill Beasley was one of Canada’s more prominent horse owners and breeders. His horses – Canadian Champ, Hidden Treasure and He’s A Smoothie – each won Horse of the Year honors. His 20 years in the horse business was highlighted with the winning of the first Queen’s Plate run at Woodbine in 1956 with Canadian Champ, a colt he purchased for $7,500 at Windfields Farm’s first sale of yearlings in 1954. 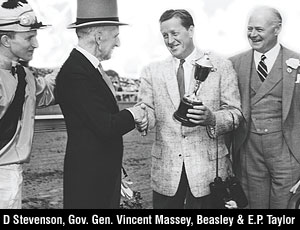 Beasley, who made a fortune in bingo games and children’s rides at midways, carnivals and amusement parks, had high hopes for the bay colt the moment he looked him over. “The first thought that came to my mind was that I had bought a champ.” Canadian Champ was national 2-year-old champion in 1955 and Horse of the Year in 1956. Throughout his career he was practically unbeatable on home ground, winning 15 stakes races in Canada. Besides the Plate he also won the other two races that constitute Canada’s Triple Crown – the Prince of Wales and Breeders’ Stakes. Beasley’s $7,500 investment grossed $152,000 in purses before he sold him back to E.P. Taylor for about $150,000.

Beasley had his earliest successes in the late 1940s and early 1950s with horses like Pink Velvet, Pink Nightie and Tiny Terry, all of whom caught the imagination of racing fans. Beasley’s first thoroughbred purchases were Everness and Full Swing, both stakes winners. In 1961 Hidden Treasure brought national honour to Beasley by being named Horse of the Year. In 1967 He’s A Smoothie was named Horse of the Year. He also won the Canadian International Championship and finished fourth in the Washington International at Laurel, Md.

In the mid 1980s the name of Beasley was still leaving its mark on Canadian and international racing. In 1963 Beasley purchased a colt named Sunny by Princequillo out of Sunshine Nell, from Claiborne Farm in Kentucky. Sunny went on to win the Mohawk, Marine, King Edward Gold Cup and Vigil Stakes. At stud Sunny sired several dams of stakes winners, with the most prominent being Mostly Sunny, dam of Kentucky Derby winner Sunny’s Halo, who was Canada’s champion two-year-old. 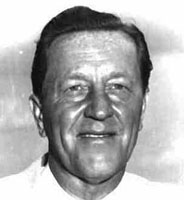