Raymond Benoit was born in Ottawa on March 10, 1920. He graduated from the University of Ottawa with a diploma as a funeral director. Benoit was also active in radio, and hesitated long before choosing the latter as his career. He became announcer for CBF and CBM, the Canadian Broadcasting Corporation’s English and French stations in Montreal, and spent two years as announcer at CHLP, a private station in Montreal. He returned to Hull and for five years was general manager of station CKCH.

Benoit was 30 when he started at Montreal’s Richelieu Park. He pioneered the bilingual call “C’est un depart … it’s a go”. Combined with his colorful descriptions and the ability to slip easily from French to English, he made an evening at the races a real treat for fans of both languages. In 1976 he accepted the post of director of information at Blue Bonnets. In 1979 he was named public relations director. In 1983, he was named president of the Harness Publicists Association. Much in demand as a speaker and master of ceremonies, Raymond Benoit represents the sport of standardbred racing with much dignity at sporting affairs across Canada. 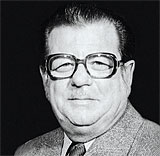