Paul-Emile Larente was not only a gifted trainer-driver in his own right, but he was a father figure to many of today’s stars of racing. Not only did his son, Jacques, better known as Jimmy, go on to become a top horseman, but both Roger White and Benoit Cote, later inducted into the Canadian Horse Racing Hall of Fame, got their initial training from Pere Larente. A good ambassador of the sport besides, Larente was responsible for many new owners becoming involved in racing.

He made his racing debut at Montreal’s Parc Delormier shortly after World War I. Associated with many top horses, perhaps his most famous was Dickerson, which he drove to 45 victories (including three heats in the same afternoon), at 18 different race meetings in Quebec.

Paul-Emile Larente shared his love for horses with his entire family. His son Jacques enjoyed many successful years in the United States, as did his grandsons, James and Bobby, who also followed in the tradition. His daughter Pauline was involved as well and became the first woman to hold a judge’s license for a pari-mutuel track in Quebec. The spirit of Pere Larente continued to live on. 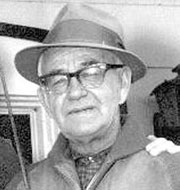