Many people support the theory that without Bill Connelly there would not be harness racing in Alberta. There would be no Stewart Fraser Memorial, Autumn Gold Championship, Breeders Crown, Western Canada Pacing Derby and Nat Christie Memorial. His perseverance and faith paid off from the sports rebirth in 1961 through 1967 when he sold the operation to the Edmonton Exhibition Association, which is now known as Edmonton Northlands. An undertaker by profession, he persuaded the Exhibition Association to hold a short meeting in the early 1950s, which was dropped the following year.

Undaunted, he went on his own and in 1961 personally leased tracks and advanced shipping costs just to keep the sport going. The following year, nearby Ladner came aboard so that there could be winter racing to complete the circuit. In 1961, when he started, there were only seven harness horses in the whole province. At that time he brought in a knowledgeable racing man, the late Ed Keller, dean of North American racing secretaries. “It was tough going and Connelly made full use of his large family. His wife Phyllis did the charting, Bill himself operated the tote board and the six kids took tickets, sold programs or whatever”. 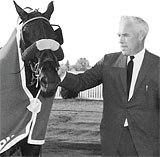 Connelly realized that the future of harness racing in Alberta depended on the breeding industry and delved into that. He built barns and a half-mile track at his Lakeshore Trotting Farm at Big Lake where he staged a matinee card at his farm to get the show on the road. He wanted to build up the sport from the grassroots and bought a dozen broodmares. He also acquired Frisco Adams, the sire of Blackie Frisco, who won Horse of the Year honors in Edmonton.

The largest crowd to see harness racing at Northlands was the day when Connelly decided to give free admission and orchids to all the women. Ten thousand fans came out and it ranked as the largest crowd at an Alberta track.

Connelly’s contributions to the sport also included the introduction of the teletimer in 1965 from American Tote. He also started night harness racing in Edmonton, Calgary and Ladner. In the spring of 1984, Connelly was honored as the father of harness racing in Alberta at the annual awards dinner.

Connelly’s love of the sport started as a child with visits to the races with his dad at old South Side Exhibition grounds. The love affair never ended.