Harry Giddings became a horseman early in his teens because of a claustrophobic fear of schoolrooms and the fact that his father, Harry Sr., had some of the finest thoroughbred racing stock in Canada on his Cedar Grove farm in Oakville. He needed somebody to take care of them. “He eventually gave up trying to force me to get an education and bought me a few mares for $25 or $30 apiece, and then put me to work,” recalled the ruddy-faced “Squire of Oakville” in 1942 after saddling Ten to Ace, his unprecedented eighth Plate winner. Until Roger Attfield came along sixty years later to record his seventh Queen’s Plate victory, only Pete McCann of Windfields Farm was closest with six wins. It was the first and only Plate victory under the distinctive red, white and blue silks of the man who bred, owned and trained the horses in his stable.

A robust horseman who had been a sturdy shot putter in his schooldays and later owned “the best stable of fighting cocks in these parts,” Giddings won four King’s Plates for his father(St. Bass, 1911; Hearts of Oak, 1913; Beehive, 1914 and St. Paul, 1920); two for R.W.R. Cowie (Froth Blower, 1931 and the filly Queensway, 1932, the first horse to win the three races that today comprise Canada’s Triple Crown) and the legendary Horometer, a future Hall of Fame inductee, for Oshawa auto industrialist R. S. (Sam) McLaughlin. He also trained for Bill Beasley and R.J. Strome. Strome’s Lord Faimond almost gave Giddings his ninth Plate, but finished second in 1948 to Last Mark. It would be his last Plate horse of the 43 he entered during an incredible career.

Giddings’s training feats were unmatched when he dominated horse racing, winning every major stakes race on numerous occasions. He owned and trained Marine, who later had the distinction of having a stakes race named after him at Woodbine. Marine came to fame in 1929 when he set the record for a mile at Blue Bonnets. He often said the Marine was the best horse he ever handled. Giddings had a prodigious appetite said author Jim Coleman in his obituary of a man he described as a fabulous figure. He was a trainer of the “old school.” “He didn’t belong to this age- he belonged to the colorful past when living was considerably more gracious and leisurely. Giddings could spend an hour describing last Sunday’s dinner, even the recipe for the sauce. He snorted, when after the first of his crippling heart attacks, the doctors told him that he would have to reduce the number and size of his meals. He went right on eating, and although it probably hastened his death, he enjoyed himself. In the last couple of years he trained his horses from behind the wheel of his car, parked near the three-quarter pole at Woodbine Park.

His memory was as prodigious as his appetite and with amazing accuracy he could tell you about races that were run at the beginning of the century. Coleman commented, “We will remember him best as we used to see him in the afternoons on the lawn at Woodbine.he would be wearing his usual neat grey hat and he would have a cigar clenched between teeth. He would look to be exactly what he was – a prosperous, genial, horsey country gentleman. He lived every minute of his life.”Giddings died on June 15, 1949. 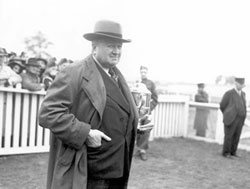