Capt. John T. Cruickshank’s dream of creating a harness racing facility in Atlantic Canada became a reality in August of 1955 when the doors to Sackville Downs opened. John Cruickshank earned the “captain” designation from his years as sea captain, operating cargo freighters out of Sydney and Halifax. He continued his shipping line long after he quit going to sea, dispensing of the business in the early 1970s. He was a spry 85 when he died on March 10, 1981, in Pompano, Fla. A native of Georgetown, PEI, Cruickshank delivered groceries from his father’s general store by horse and wagon as a boy. Later when the family moved to North Sydney, he would get involved with ice racing on the Bras d’Or Lakes.

His mark on Maritime harness racing was made when he and a business associate, Bertram Cruikshank (no relation) decided in the early 1950s to build a race track on the captain’s dairy farm in Lower Sackville, about 12 miles from Halifax. At that time Sackville was a rural community and many doubted the wisdom of building a race track “out in the country.” But their vision proved correct. By the 1980s Sackville was a bustling community of 60,000 and still growing.

He was able to foresee far into the future of racing. It was this sense of timing which not only led him to the construction of Sackville Downs, but his continual upgrading of facilities for the public and horsemen alike. An electric tote board, new lighting and the introduction of a stone dust track in 1961 to Maritime racing were just a few of his many accomplishments. His glass-enclosed grandstand in 1973-1974 allowed Maritimers the first opportunity to witness racing year-round.

Cruickshank entered the breeding industry on a grand scale. He purchased 350 acres of land and stood his own stallion, Firebolt, a former free-for-all champion and Horse of the Year in Atlantic Canada. Later he stood Capital Rob and Meadow Lu Dawn. One of his mares, Lace, had title to the Sackville Downs trotting record for over two decades. Maple Leaf Scooter, a three-year-old filly, owned several Maritime trotting records. He also bred and raised Maple Leaf Robbie, who was a champion at two and again at three.

In keeping with Cruickshank’s wishes, there was no cessation of racing at Sackville Downs following his death. The only time the lights dimmed was on the mid-week card when owners, drivers, trainers and officials gathered at trackside for a brief tribute. Noble Master, his trotting stallion, paraded in harness and driverless sulky and fans paused to remember one of the builders of the industry. 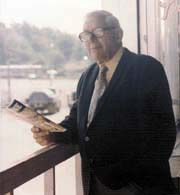