Leslie Ehrlick was a well-known and respected gentleman whose efforts have significantly contributed to the growth and success of Canadian harness racing. His early identification of the plight of horsemen in lacking representation in matters concerning racing conditions, purses, appeals, etc., prompted his work in the formation of the United Harness Horsemen’s Association. With the relocation of this association to Quebec, Ehrlick directed his attention towards the formation of the Ontario Harness Horsemen’s Association, which was established in 1961. For 15 years he served as president of this organization and witnessed its growth from a membership of 400 to 7,000. The OHHA is the largest standardbred association of its kind in North America. Ehrlick also served as a director of the Canadian Trotting Association.

In recognizing the need for a national harness horsemen’s association to provide a unified front, Ehrlick was instrumental in the formation of the Canadian Standardbred Horsemen’s Association in 1972. He served as president of this association for a number of years. Without Ehrlick’s genuine concern for all parties involved in harness racing, and his integrity in his dealings with people, the Canadian standardbred industry would not be what it is today. He died in 2001. 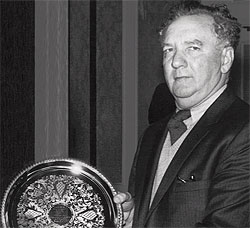