Few men have played a more active role in racing than Joe Thomas. For more than half his lifetime he devoted his career to the promotion of thoroughbred racing. As vice-president of E.P. Taylor’s Windfields Farms, he specifically guided the fortunes of one of the most successful racing and breeding establishments in the history of the sport. But Joe Thomas worked just as hard for the improvement and promotion of the sport in general. He spoke at racing functions, participated in seminars, and contributed articles to many thoroughbred publications.

He was obviously a man in love with the sport of horse racing. “There’s such a fascination in it,” he explained while discussing the intricacies of breeding champion thoroughbreds. Thomas was born in Pocatello, Idaho, in 1924, and raised in Los Angeles. As a boy he opened the gates at Santa Anita racetrack. After the Second World War, in which he saw active duty in the Pacific as the Communication Officer of a Landing Ship, Tank, and was part of the landing forces in Japan, he decided to get a job in the racing industry. After walking hots at Hollywood Park he decided there wasn’t room for progress and went back to the navy for 18 months until John Hertz helped him get a job working for John Clark, horse agent and director of publicity for Keeneland Race Course. The day he arrived in Lexington, Ky., the local turf writer died and Thomas began writing a column for the Lexington Herald. He also contributed to several racing publications. 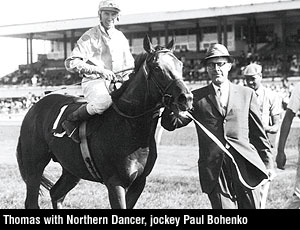 He met E.P. Taylor in 1955 and the following year was named manager of Windfields’ racing stable. In the mid-1960s he assumed the responsibilities as manager of Windfields’ vast breeding operations as well. He and his wife Louise spent about half the year in Maryland and half in Ontario, the two sites that made up Windfields Farm. As he neared age 60 he looked back with particular affection on Nearctic, the sire of Northern Dancer. “I think my favorite horse was Nearctic. He was such a spectacular horse and I was intimately involved with him right from the start.” Joe Thomas was, of course, intimately involved with many outstanding champions over the years. His list of achievements and successes were unending. Suffice to say that it was thoroughbred racing’s good fortune that Joe Thomas was intimately involved with the sport for most of his lifetime.

In 1983 Thomas was chosen Man of the Year by the Jockey Club of Canada but was unable to accept his Sovereign Award in person because of his failing health. That year he was also awarded the Mint Julep Cup by the Canadian Thoroughbred Horse Society for his contributions to the industry. He died of cancer on June 7, 1984, at age 59.