“Fitz” always did have a way with the “girls”, twice winning the Queen’s Plate aboard fillies, horses who rarely excelled in Canada’s most important race for three-year-olds. The Calgary-born jockey, whose best performances on the Ontario Jockey Club circuit came during the 1960’s, was aboard Flaming Page in 1962 when she upset her prominent stablemate from Windfields Farm, Choperion, ridden by Bill Hartack. The two jockeys agreed to split the 10 percent share of the winning purse, on condition that the loser would also be presented to the Queen Mother. Any concern about Flaming Page’s ability to run two tough races in a space of seven days (she’d won the Canadian Oaks a week earlier) were dismissed when she took command at the top of the stretch and pulled away to win over Choperion. 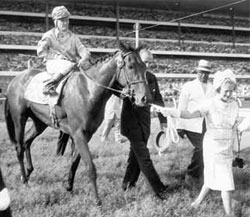 Five years later, in 1967, Fitzsimmons was up on Conn Smythe’s outstanding filly, Jammed Lovely, who in 2007 was inducted into the Canadian Horse Racing Hall of Fame. The filly won by a neck over Pine Point and Avelino Gomez. Bettors should have known better than to allow a filly ridden by the westerner to go off at odds of almost 12-to-1. Throughout his distinguished career, “Fitz” dominated stakes races for fillies and mares. He won the Oaks twice, on Flaming Page and Northern Minx, and twice won the E.P. Taylor Stakes as well as the Selene, Natalma, Fury and Maple Leaf Stakes. Another filly he rode regularly, Song of Even, won the Prince of Wales and Breeders’ Stakes against the boys.

Among the outstanding fillies and mares he won with were Not Too Shy, Court Royal, Victoria Regina, Northern Blonde, Menantic, Forest Path, Lady Rhythm, Flashing Top, Epic Queen and Menaris. He also guided some top colts to the winners’ circle – Big Blunder, Bye and Near, Ette Rule and Choperion.

Fitzsimmons rode his first winner in 1951 in Saskatchewan and went on to compete successfully in western Canada before moving his tack to Ontario. When he came east at age 31 from the foothills of the Rockies he didn’t have a big reputation. He certainly left with one. “Fitz” wasn’t a flashy rider, but he always gave the racing business his best and did his best to promote the sport whenever he could. The crew-cut jock with a ruddy face and a swaggering strut was leading rider on several occasions at the Woodbine, Greenwood or Fort Erie meetings. But, the Canadian title always eluded him, losing to Ron Turcotte in 1962 and ’63 and Gomez in 1964. After retiring as a rider in 1970 Fitzsimmons returned to Calgary and worked as custodian of the jockeys’ room and as a timer for the standardbreds at Stampede Park until his retirement in 1994.He was inducted into the Alberta Sports Hall of Fame in 1990.  Fitzsimmons died in March, 2001, at age 71.