B C Count, a 1972 foal by Tar Duke out of Reeds Phalla, was described by horsemen as one of the most successful pacers ever bred in Western Canada. The initials B C stood for British Columbia and he was affectionately known as “The Count” by fans across North America. Bred, raised and raced early in his career by Jack Graham (a Hall of Fame inductee in 1990) of Aldergrove, B.C., “The Count” campaigned for 10 years and compiled a record of 71 wins, 48 seconds and 48 thirds in 324 starts and earnings of $536,583. Forty-nine of his wins were clocked in two minutes or faster, the most ever by a Canadian-sired horse and second only to the legendary Rambling Willie when he retired. He was voted “British Columbia Horse of the Year” five times.

“The Count” was purchased early in his 3-year-old campaign by Charles Meyer of Escondidio, Calif., sight unseen. In his first start for his new owner “The Count” promptly lowered his lifetime record by a full 10 seconds. B C Count scored his first 2:00 win at age four in 1976, a season in which he won 11 times, fastest in 1:56.2, and won legs of the Can-Am Pacing Series at Yonkers Raceway, Freehold Raceway and Buffalo Raceway and was second in a leg at Garden City Raceway. He started no fewer than 24 times in each of the next eight years, winning consistently in 2:00 or better. At age eight in 1980 he won $97,009 and three legs of the B.C. Classic Series at Cloverdale Raceway, and topped $85,000 in two other seasons. 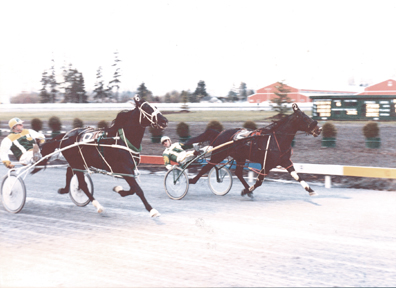