Helicopter, owned by Elgin and Ted Armstrong of Brampton, Ont., was the first Canadian-owned horse to win trotting’s most prestigious event, the Hambletonian. A 1950 foal by Hoot-Mon – Tronia Hanover, Helicopter also became the first horse to duplicate her sire’s feat of winning the Hambletonian. Later she established the foundation of one of the most prolific maternal trotting families in North America.

She was purchased as a 2-year-old for $7,500 from noted trainer Del Miller, who continued to direct her racing career. At age two, Helicopter showed promise by winning a Breeders Filly Stakes at Indianapolis. Leading up to the 1953 Hambletonian at Goshen, N.Y., she had won four races, fastest in 2:04, against inauspicious company. When she trained impressively prior to the Hambletonian, Miller and the Armstrongs were strong in the belief that she would display surprising ability. So, she became part of a three-horse entry from the Miller stable in a massive field of 23 that contested what was then the richest purse in the history of harness racing, $114,775. Eyebrows were raised, however, when Miller named his 29-year-old assistant, Harry Harvey to drive Helicopter.

There were two tiers of 10 trotters, followed by a trio in the third. Helicopter broke stride in the first heat and finished 17th and that would be her starting spot for the second heat. Harvey got her away fine and found a spot along the rail. With about a quarter-mile to go. Helicopter collared stablemate Singing Sword in the homestretch and won in 2:02.4. Twenty horses returned for the third and final heat. Helicopter waited in fourth place as Singing Sword and Kimberly Kid led the field into the homestretch. Singing Sword faltered and when Kimberly Kid went off stride the filly glided past him into Hambletonian history with a 2:02.3 win. The Armstrongs had their first major Grand Circuit event and Harvey became the youngest driver to rein a Hambletonian winner.

Helicopter placed in several major stakes races at three and four before joining Armstrong’s budding broodmare band. She produced 10 foals, including world champion Armbro Flight, who was voted Canada’s Horse of the Year three successive years. Armbro Flight is the dam of Hambletonian winner Armbro Goal. A son, Armbro Jet, went on to become a leading sire of trotters in Ontario, including Bridger. The Helicopter family offspring were also enhanced by world champion Armbro Regina, Armbro Ermine and Armbro Luxury 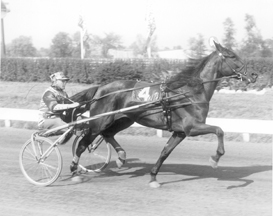