Harold Andrew McKinley was a horseman who belonged to an era when two-minute miles were a thing to dream about. For almost five decades he was one of Canada’s top drivers and trainers of harness race horses. McKinley, who was born in Sault Ste. Marie, Ont., was from a family that was deeply involved in the sport. In 1930 the family moved west and settled in Peace River, Alta., where Harold and his father competed in race meets throughout Alberta and Saskatchewan. It was after World War II that the family decided to move back east. To finance the trip they traveled from track to track across the prairies, earning enough to move to their next destination. 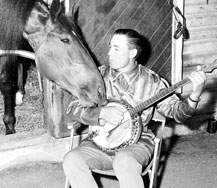 A versatile musician, McKinley often serenaded his “fans” with his ukulele

McKinley raced at Toronto’s Dufferin Park in the winters and Quebec City in the summers during the late 1940s and early 1950s. He trained and drove for the powerful Armstrong Bros. stable of Brampton from 1954 to 1959.McKinley was tagged as a “maker of horses” and among the horses he broke and trained were Armbro Express, Good Flyer, Take Command, Selka Song, In Free, Cedarwood Chips and Bye Bye Byrd’s outstanding son, Lynden Bye Bye, who won the 1972 Queen City Pace, now known as the North America Cup. McKinley won numerous major events, including the prestigious Maple Leaf Trot Classic twice, with Armstrong’s In Free in 1957 and Selka Song in 1960. McKinley won the first edition of the Burlington Stakes in1964 with Armbro Egan and with Lynden Bye Bye in 1972, who also won the Champlain Stakes, formerly the Woodbine Futurity, in 1971. The inaugural edition of the Valedictory Stakes pace at Garden City Raceway was won by Eagle Armbro with McKinley in the bike. He also won this event in 1975 with Pacin Jason. Three times McKinley was the leading Universal Driving Rating System (UDRS) driver at Mohawk.

McKinley liked to joke that he was “really happy when he had a horse to train.” He was 76, and still getting up every morning to do what he did best, train harness racing horses at his Norval, Ont., stable, when he died in his sleep after suffering a stroke in May, 1998. 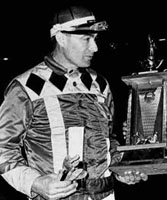