Jim Coleman was introduced to the sport of thoroughbred racing when he was knee high to a horse’s hock. As he grew, his love for the sport did too. A dapper gentleman, Coleman entertained newspaper readers across Canada for years of tales of larcenous characters, backstretch skullduggery and the colorful and intriguing world of thoroughbred racing. He’d been doing with love and devotion since 1931, the year he began his journalistic career with the Winnipeg Tribune. On January 14, 2001, Canada’s premier sportswriter died of heart failure at age 89 in Vancouver. Coleman, who wrote his columns while chomping on a cigar, refused to retire from his job at the Vancouver Province. He worked to the end – his last column appeared the day he died. In their last conversation Coleman asked his son to bring a typewriter to the hospital so he could keep writing. He never did join the electronic age, pecking out his column, Memory Lane, on an old upright Underwood typewriter. 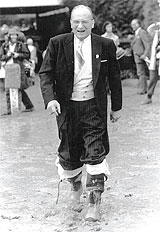 His lengthy career earned him countless honors, including the Order of Canada as well as induction into the Canadian Sports and Newspaper halls of fame and the media divisions of the football and hockey halls. Born in Winnipeg in 1911, Coleman credited his father, a former newsman who had risen in the ranks of the Canadian Pacific Railway to vice-presidency, for his lifelong love of sports – especially horse racing, hockey and Canadian football. He lived in the posh suites of hotels from Vancouver to Montreal and often traveled in a private rail car to Saratoga Springs, N.Y., and World Series’ baseball games. Author of three books, A Hoofprint on My Heart, Long Ride On A Hobby Horse and Hockey Is Our Game, Coleman’s 70-year writing career enabled him to regale readers of the Vancouver Province, Edmonton Journal, Edmonton Bulletin, The Canadian Press, The Globe and Mail and the chain of Southam Newspapers.

Coleman was educated in Victoria and McGill University. At the age of 10 he made his first visit to a racetrack when his aunt took him to Brighouse Park in Vancouver. She put up a $2 place wager on a horse he selected from the program, Mineral Jim, who finished third. He was hooked. Coleman explained, “… you may be wondering how anyone can get hooked on horse racing at the age of 10 or so and then go through an entire lifetime without shaking the habit. It’s easy, really. All you require is the spirit of perseverance.” A notable drinker in his younger years – he swore off booze in the late 1950s – he once wrote, “I lived two lives. One the newspaperman who drank too much but who usually managed to complete his work; the other the escapist who spent much of his time in a dream world populated by horses, horsemen, gamblers, bookmakers, touts, stock hustlers and oddball sports promoters.”

A Westerner at heart, Coleman was really a Toronto guy. However, he enjoyed poking fun at easterners who controlled the major sports establishments. His chief target of criticism in the 1940s was the Ontario Jockey Club, which finally opened the King’s Plate to westerners and Quebeckers in 1944. He owned a Plate entrant in 1947, Leonforte, a horse that provided him with numerous columns of the despair owners might encounter.

Coleman joined the staff of The Globe and Mail in 1941 and stayed in the east for more than 40 years. In 1950 he went to work at Thorncliffe racetrack in Toronto. When E.P. Taylor bought up the thoroughbred tracks in Ontario, he was hired as the OJC’s director of publicity, a job he held until 1962. He was ectastic in 1965 when Whistling Sea became the first western-bred to win the Plate. Coleman also had a stint as a member of the Ontario Racing Commission. 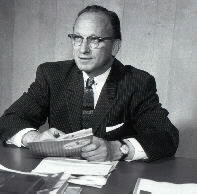