At one time in his lengthy career, the cowboy from southern Alberta broke wild horses in Montana. And long before he trained horses for wealthy owners in Ontario, Duke Campbell toiled at tracks and on starting gates across the prairies. During the tough times of the Great Depression in the 1930s he was a butcher in Winnipeg.

But Campbell’s chief claim to fame will always be that he was the man who discovered and developed Sandy Hawley, one of the world’s great jockeys. Like many of the outstanding horses he would condition for Jean-Louis Levesque, Art Stollery or Tom Hays, Hawley was brought along slowly before developing into a future Hall of Famer in both the United States and Canada.

Born in 1911 in Frankburg, Alta., Campbell got his start with Charlie Leavitt and the Steadman Stable at Chinook Park in Calgary. He later went to work for legendary western horseman Jim Speers in Winnipeg, working at his tracks and managing his ranch in Carberry, Man. “I worked on the first starting gate in Canada at Speers’ track just before the war.”

When Speers died Campbell shipped east to E.P. Taylor’s National Stud. “My job in those days was to train the horses Taylor would be selling. He had too many. That’s how I began working for Levesque,” recalled Campbell. With Levesque he had Arctic Dancer, a full-sister to Northern Dancer and the first filly to sell for $100,000, as well as Pierlou and Ciboulette, the dam of Hall of Fame champion Fanfreluche.

His best horse for Hays was Fly along, who finished second to Whistling Sea in the 1965 Queen’s Plate. Ironically, Whistling Sea was the first Western-bred to ever win the Plate. Duke’s favorite horse was a Western-bred called Wilkie. “He could outbreak any horse alive and should have won a big race at Woodbine except that the jock pulled him up when he thought he was going to go through the fence.” 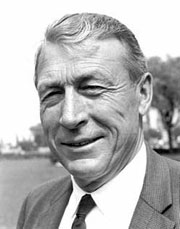