Cameron John Donald Fraser’s lifelong dedication to the sport of harness racing in Western Canada earned him induction into the Hall of Fame. In 1985 he received a Canadian Standardbred Achievement Award for his numerous contributions to the industry. Born in Canmore, Alta., in 1915, Fraser’s interest in racing came naturally as he was the son of Stewart Fraser, a former Cape Breton horseman who was known as the best blacksmith in western Canadian harness racing. Alberta’s major race, The Stewart Fraser Memorial, was named after Cam’s dad.

For many years Fraser was a racing and breeding partner of Jim LeLacheur and together they built the Western Standardbred Farm, an 80-acre breeding operation 12 miles south of Edmonton. One of their outstanding racehorses was Habitant May, who won the Lieutenant-Governor’s Purse and Petticoat Stakes en route to becoming Alberta’s Mare of the Year in 1978. Another of Fraser’s favorites was Miller’s Scout, whom Buddy Gilmour drove in three exciting Stewart Fraser Memorial finals. He stood Miller Scout at stud for a fee within the budgets of everybody who had a mare in Alberta.

Fraser was instrumental in organizing harness horsemen in the west. He founded the Western Canada Harness Horsemen’s Association and served as president and director of the Alberta Standardbred Horse Association. He gained recognition as the inventor of the gull-wing starting gate, a revolutionary concept which allowed the starter an extraordinary view of the starting field. To make tracks safer and faster he invented a hydraulic track leveller to improve track maintenance. Fraser was a longtime proponent of winter racing in Alberta, which was finally introduced during the 1982-1983 winter season. Fraser died at age 72 in October, 1987. 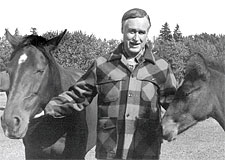