John J. Mooney thoroughly knew the sport of thoroughbred racing. In fact, Mooney was “weaned” on the backstretch. As he matured, Mooney worked his way from stable hand to minor official to chief executive officer at major racetracks in Canada and the United States and was one of racing’s most respected executives. He played a large role in Woodbine’s positioning as one of North America’s prominent racetracks. While serving as an assistant general manager at Oaklawn Park in Hot Spring, Ark., in the early 1950s, Mooney was approached by E.P. Taylor and George C. Hendrie from the Ontario Jockey Club about joining the management team to reorganize Ontario racing. Mooney accepted and helped the OJC through a crucial transition period that culminated in the opening of the “new” Woodbine in 1956. 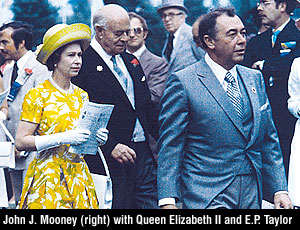 He became general manager of the OJC in 1957 and served as president from 1971 to 1975. Under his leadership the Canadian International Championship Stakes evolved into a race of worldwide importance and served as the farewell race for Secretariat. Mooney left the OJC presidency to develop his Nashville Stud near Kleinburg, Ont., the only farm in Canada to provide both thoroughbred and standardbred stallions. In 1962 he was named president of the Canadian Thoroughbred Horse Society and a year later was a driving force behind the formation of the National Association of Canadian Race Tracks (now Racetracks Canada). In 1972 he succeeded E.P. Taylor as a director of the Thoroughbred Racing Associations. In 1978 Mooney served as director of racing operations at Stampede Park in Calgary for a year and in 1980 was named president and general manager of Laurel Race Course in Maryland. He took a similar role at Chicago’s Arlington Park for two years and later became a director of the United Totalisator Company.

A native of Toronto, Mooney was born on Sept. 7, 1924, the same year his father, John D. Mooney, captured the Kentucky Derby on Black Gold. His dad also rode King’s Plate winner Shorelint in 1929. Mooney worked at racetracks where his father rode during summer holidays. Travelling with his family, Mooney attended some 36 schools, some of them twice, before graduating from high school prior to the Second World War.

After service with the Royal Canadian Air Force, Mooney worked in minor positions on the Ontario racing circuit. He also spent part of the year working at Tropical Park in Florida and Oaklawn Park before being approached by Taylor and Hendrie.