It was often said that the pony in Art Warner’s barn received as much attention and care as the most expensive horse in his stable. That was the type of horseman he was. His love of all animals was legendary – nothing in his life was quite as important. No sacrifice out-weighed a horse’s well being. Often gruff around humans, Warner handled his stock with a parent’s warm affection. Columnist Jim Proudfoot summed up Warner’s attitude best, when he wrote: “Do you believe in reincarnation? I do,” a fellow once said on the backstretch at Woodbine. “And when I come back, I want to be one of Art Warner’s horses. Most people don’t get treated as well as they do.” 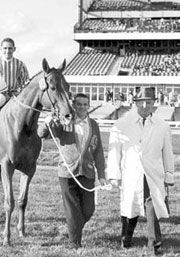 Born June 25, 1911, Warner grew up in Toronto’s east end near Broadview Avenue and The Danforth. He was working with horses at age 12, became a jockey and rode his first winner at age 16 at Thorncliffe Park in 1927. He’d say, “I’ve worked everywhere east of the Mississippi and been everything but a valet. I never went to California because it was too far to come back if things didn’t work out.” After giving up his public stable in Chicago he returned to Toronto in 1955. The Matthew J. Boylen family, getting started in racing, hired Warner to make its Lanson Farm a powerhouse on the Ontario Jockey Club circuit. This Warner did with such steeds as the great handicap star and future Hall of Fame inductee Anita’s Son, Canadian Maturity winner Foxy Phil, Fleet Path, Flying Trapeze, Calais II, King Gorm, First Minister, Dr. Em Jay, winner of the Breeders’ Stakes, Forest Path, one of Warner’s three fillies to win the Seaway Stakes and Big Blunder, whose second place finish to Merger in 1968 was his Art’s best finish in the Queen’s Plate. Warner trained most of the 56 stakes winners recorded by Lanson Farms. Overall he saddled more than 80 stakes winners.

Warner would later train for Kinghaven Farms and was Ernie Samuel’s first trainer in the early 1970s. After leaving Sam-Son, he hooked up with Rick Kennedy and Brian Cullen. He won the Breeders’ Stakes with Crowning Honors and the Canadian Oaks with Avowal, the Sovereign Award champion sprinter and three-year-old filly. Polite Lady, one of Art’s great ones, Pre Emptive Strike, Madame Treasurer and Bishop Bob were also stakes winners. Warner died in July, 1986, at age 75. 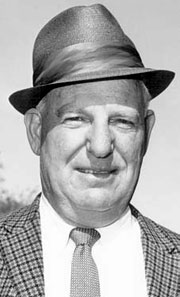