During a career in which he won 4,000 races, there wasn’t a harder working jockey on the grounds than Hustlin’ Hugo. One statistic heled in each season was most mounts. It was this work ethic that enabled Hugo Dittfach to get his start in Western Canada, and one he never discarded during a career which was highlighted in 1991 when he was awarded the Avelino Gomez Memorial Award. The award goes to a jockey who had made a significant contribution to the sport. Another huge moment in his career occurred in 1975 when The Jockey Club of Canada inaugurated the Sovereign Awards to honour horses and people in the industry. The first winner of merit to a jockey went to Hugo Dittfach. 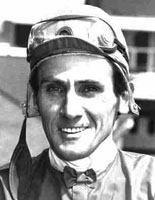 Dittfach had to overcome more obstacles than most jockeys. He came to Canada after World War II, a refugee from East Germany who had spent time in a concentration camp in Poland. It was while working as a busboy in a Calgary restaurant that a patron suggested he was the right size to ride horses at the track. Dittfach knew nothing about riding horses, but through hard work and persistence he rose to the top of his profession.

His career began in 1956. Hugo was the leading rider at Calgary, Edmonton, Saskatoon and Regina before heading to Ontario. Runner-up for seasonal honours in 1958 to Al Coy and to Avelino Gomez the following year and third behind these two jockeys in 1960, he finally hit the top in 1961, which turned out to be an especially gratifying year. He won the Queen’s Plate in one of the closest finishes in the history of the race. Aboard Colonel K.R. Marshall’s Blue Light, a 20-to-1 outsider, Dittfach hustled his mount down the stretch in a stirring duel with the world’s leading race winning jockey, Johnny Longden, and the heavily favoured Just Don’t Shove. The photo went to Dittfach and Blue Light by a nose. Dittfach during his career won countless important stakes races at Woodbine, Fort Erie and Greenwood, many of which came on Anita’s Son and other horses from Lanson Farms, Windfields Farm, Stafford Farms and Conn Smythe. He also led all jockeys in 1965 with 177 wins. He retired in 1989 to pursue a career as a trainer