Among the outstanding racehorses in North America during the late 1940s and early 1950s was Arise, a Kentucky-bred colt owned by Harry Addison Sr., and Mrs. W.J. Addison of Toronto and trained by Jim Bentley, a future Hall of Fame trainer.

In 1949 he became the first Canadian-owned colt to win the prestigious Travers Stakes at Saratoga, N.Y. Arise also won the Canadian (International) Championship at Long Branch that year and came within a nose of upsetting Horse of the Year, Capot, in the Jerome Handicap at Belmont. It was a glorious season in which he also placed in the Frontier and Motor City Stakes and the Saranac Handicap. During one of his visits to Toronto that year Arise broke the 15-year-old track record for six furlongs at Thorncliffe with a clocking of 1:10 2/5ths. He won six races and placed in four others in 12 starts.

Foaled in Hamburg Place, Ky., Arise was acquired by Jack Addison in 1946 along with four other weanlings for $20,000 from breeder R.M. Wood. In 1948 the brown colt showed great promise in the major 2-year-old races in New York, placing second in the Youthful and third in the Tremont and Great American Stakes and winning two other starts.

His campaign at age four was impressive as he won the Excelsior, Fall Highweight and American Legion Handicaps and placed second or third in the Widener, Paumonok, Valley Forge, Palm Beach, Grey Lag, Saratoga, Bay Shore and Wilson Stakes. Winning at distances from six furlongs to 1 1/4 miles, Arise was in top form at age five, capturing the Monmouth, Questionnaire and Carter Handicaps.

Arise’s outstanding race record of 19 wins and 20 second or third place finishes in 51 starts against top handicap horses earned the Addison Stable – $199,990, a sizeable figure in those days. Similar success in those races today would have earned him more than $2 million. In 1953 he went to stud at Claiborne Farm in Paris, Kentucky. 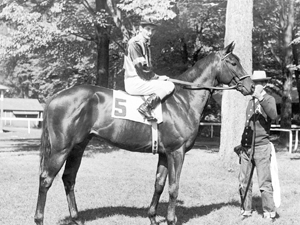